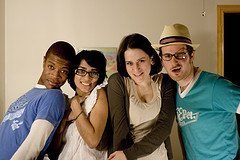 Laura Drucker over on The Daily Muse wrote a post called, “Four Simple Secrets to Roommate Bliss.” (It’s no longer on line.)

Her four simple secrets are a bit different from the four principles for successful home sharing described in “Sharing Housing, A Guidebook for Finding and Keeping Good Housemates” – but they aren’t far off. Remember the first steps are always to get to know yourself and follow a good selection process.

Here are her keys to roommate bliss:

“Share Your Baked Goods” and “Don’t Take without Asking” are variations of “The Golden Rule.

“Get Some Space” seems like it might be similar to “Your Room is Your Own, ” in the sense that going to your room and closing the door gives you space to be private and on your own.

“No Passive-Aggressiveness” implies that people should be forthright and direct about what it is that they need, like and dislike. “Do It While it is Easy” says take care of things before they become big deals.

So choose your housemates carefully!  Make sure that they understand the value of these two sets of rules about how to live well with other people. Interview, ask for references, and trust your instincts.

May you always have a good housemate.