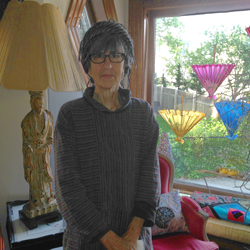 My “accordion house” is how Arnie Arnesen describes the large Queen Anne Victorian home she owns in Concord New Hampshire, the state’s capitol. She calls her house an “accordion house” because it can expand and contract according to what is needed at that moment. She was able to take advantage of her situation and reap the benefits of shared housing.

How The House Became Hers

Her aunt originally bought the house in 2009 and moved into it along with Arnie who had become her guardian. Arnie lived on the first floor with her husband and made an apartment for her aunt on the second floor (The aunt was agoraphobic and the second floor space made sense for a whole host of reasons.) For the aunt it was a place to be until her death at 92 and as it turned out, it would be the place Arnie’s husband would die a year later from stage 4 cancer.

With the death of the two people she had been caring for since she moved into her new home, in a new neighborhood, it meant life was going to be different going forward. What was Arnie to do? A life-long public servant, Arnie served in the state legislature for eight years, ran for Governor and for Congress.  She is an award-winning radio talk host but because of her liberal politics, job security proved illusive.  Passionate about radio, but leery of the inevitable pink slips of commercial radio, she found a home on a community radio station in Concord where she is currently the host of a daily political talk show called The Attitude.

Income before she moved to Concord and into the Queen Anne Victorian was always a challenge. When her aunt died, Arnie’s good news was she inherited the beautiful house, the bad news was responsible for this mansion. The carrying costs for the house are between $25,000 and $32,000. In New Hampshire (the live-free of taxes or die state) the over reliance on property taxes meant that the property taxes are over $12,000 alone.

As Arnie says:  “It was very challenging to figure out how to manage and still stay in a home and in a community I had learned to love.” Arnie considered various options, but what she wanted to do was to stay in the house she had restored and adored. She wanted to age-in-place.

As much as Arnie loves the house she loves the political history of the house. Many presidential hopefuls, campaign workers, and media types have either slept or spoken in the house (from Jimmy Carter to Bernie). This was true before she owned the house and continues to this day. The house is blocks from the downtown which means she is in walking distance of everything from shopping to theater to the library even to the hospital. She loves her neighbors. Importantly, it is the last place she lived with her husband before he died.  For all these reasons, she really didn’t want to leave the house.

She knew she didn’t want to destroy the interior of the house, which would have been necessary if she created apartments.  She decided to share the house by renting out bedrooms on the second floor.

The building has three stories. The first floor has two large front rooms with a sliding panel door, a dining room, bedroom, and a very large kitchen. On the second floor there are four bedrooms. It happened that the former owner had installed a kitchen and full bath on the second floor. So Arnie decided to rent the second floor to law students who would be able to walk to the University of New Hampshire School of Law. She’s a graduate of Vermont Law School and because of her policy background, law students were a perfect fit. She also thought that law students would be ethical and responsible.  The income from those students would cover her carrying costs.

Arnie didn’t want to live on the first floor. It is the first floor where “everything happens” (political events, dinner get togethers, organic farmers annual cocktail parties…). Lucky for her the attic was a spectacular space for living. She went through a permitting process to get approval to create an apartment out of the third floor attic. The stairs up separate her from the rest of the house giving her a sense of privacy. And she she says, “from here I can see the Concord I cherish.”

And if it should happen that she can’t climb the stairs (yes, she recognizes that even she too will age) she can eventually move to the first floor.

Her daughter suggested that she should make her first floor bedroom into an Airbnb room. “Best thing I’ve ever done” she says. “I’ve met the most wonderful people from around the world and locally.” Many of the people who have stayed at the house have become friends and return on a regular basis. She has decided that Airbnb needs to make a TV series for PBS: “Shrinking the world one bedroom at a time.” She knows the stories would be amazing because she is living one of them.

For Arnie, there is a triple value in having Airbnb guests. It helps everyone with money. It’s social connection with other cultures and it is sharing.  The Airbnb income is her “creative money.”  It is the extra that allows her freedom to purchase art, plant a tree, build an outdoor sculpture, donate to a worthy cause, or host an event for a nonprofit organization.

She even “rents a wall.”  There are two labor organizers who meet in Concord once a week. They asked if they could have the “wall” in her house. In the second-floor living room, they have  two desks, a printer, a copier against one wall. The law students use the equipment for free. Everyone is happy.

Living Under One Roof

Arnie says, “Privacy is overrated.” “Having people around helps me get out of myself. I can help them. On occasion they help me. When I want company, I can just go downstairs, and when my law students need to run an oral argument past me I can critique and applaud.”  “I didn’t want to be the old bat in the attic all alone.”

Arnie works on making the house a place where people want to be. She says, “I make the house beautiful.  The house makes you smile, my guests smile. And then behavior changes.”

Arnie is passionate about the emotional and spiritual value of living with others, being a part of their lives, and being connected. When one of her law students moved out to live with a girlfriend he sent her an email in which he said, “You provided me a home that was more than a room to rent.” This is what makes her happy. To know that she can share her house and have others feel that it is home.

Not everyone has a huge house with the sorts of opportunities to make it an accordion house. Nor does everyone want to have the activist life of Arnie. She is a model for being creative with what one has.

Asked what she would say to you Arnie advises,  “Look at your house with different eyes. Ask yourself, ‘What is a way for me to stay here that gives me what I need?’”

Check out these articles about a finding a situation that works for you: Sharing in Short-term Spurts , Shared Housing For Seniors