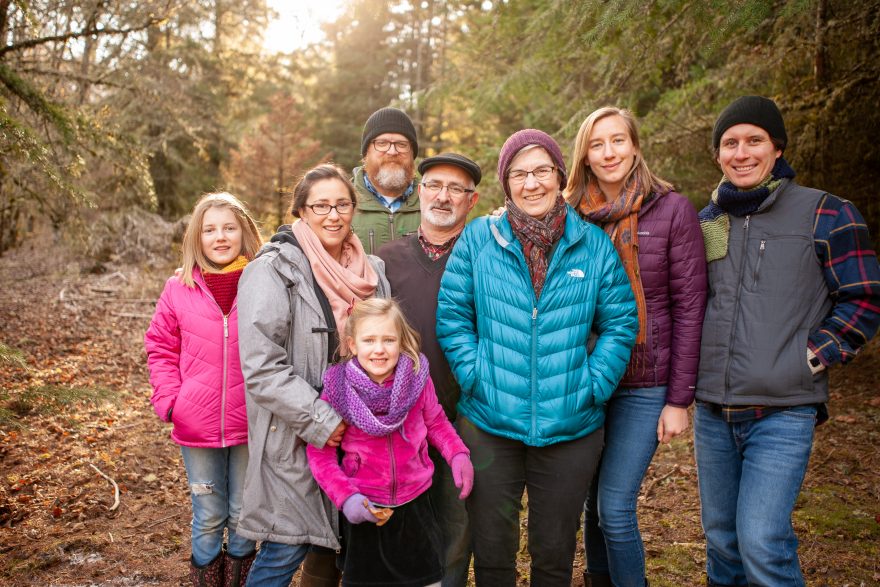 We would call it “co-living.” They called it “co-housing.” The confusion in terminology highlights how English really doesn’t have a word to describe it when people who are not a nuclear family choose to live together.  This is a great story.

John currently lives with his wife, Katie, two daughters, ages 14 and 8, another married couple, Emily and Elijah, and their new baby, Milo. The two couples own the house and are committed to living with each other into the future. They share everything “except the bedroom,” as they explain to folks who wonder about the co-living arrangement. They live in the rural town of Silverton in Oregon.

How It Started (The Blue House)

When John and Katie were dating, she said she had an interest in living in an eco-village. John remembers saying, “That is not for me. I need my privacy. It’s exhausting to live with others.” However, after John and Katie married, they met a couple, the Leslies, through their church. The Leslies had a vision of building co-housing community in their neighborhood.

To understand their plan, picture three houses next to one another, all on big double lots (with the house in front and an open lot behind). The homes were simply, affectionately, known as the Blue House, the Red House, and the Corner House. For many years the Leslies had owned the Red House in the middle. They bought the Blue House, then sold the Red House while keeping the back lot. After living in the Blue House for a few years, they sold it, too, while keeping the back lot. They also bought the Corner House, eventually selling that to the Pattisons and Neveses while — you guessed it — keeping the back lot. The whole process took more than 10 years, but today those back lots have been transformed into the Evans Oaks community, which consists of 11 cottages and a common house.

John and Katie weren’t interested in a co-housing cottage community, but they were drawn (especially Kate) to co-living. The Pattisons and the Leslies met for dinner six to eight times to explore living together. They used The Intentional Christian Community Handbook  to guide their process and used questions from that book. They shared their stories, their pet peeves, and talked through other questions in the handbook. And then they just decided to do it. John says, “Just as we were getting ready to move in, Kate and I discovered we were expecting our second child. We thought the Leslies would change their mind, but instead they said they’d love it.” That daughter, Julia, recently turned eight, and she still has a very close relationship with the Leslies. “They are as thick as thieves,” John says. In fact, on her birthday, the Leslies and other Evans Oaks families held a small birthday party for Julia in the commons.

The Blue House was large, three stories not including the cellar a previous owner had turned into a man cave. There was more than enough room for the Leslies and Pattisons. About a year into co-living, Emily and Elijah Neves asked about joining the house, too. They knew the house through a friendship with a daughter of the Leslies. The three families began to meet using some of the same questions from The Intentional Christian Community Handbook. They  bonded over dinner and conversation and the Neveses moved in a week after their marriage. “We’re all going in the same direction,” was the philosophy, “so why not go together?”

How It Has Changed (The Corner House)

In time, the Pattisons, Leslies and Neveses found themselves co-living in the Corner House. The Blue House was sold and, on what had been the three backlots, construction was underway on the Evans Oaks community. The Leslies would live right across the property line, with a special path connecting their future home to the Corner House. As the Evans Oaks project neared completion, the Pattisons prepared to buy the Corner House from the Leslies, which had always been part of the plan. Then one day Emily and Elijah pulled aside Kate and John. “We never want to not live with you,” they said. “Can we buy the house together?”

The Pattisons and Neveses finalized the sale of the house in November, 2020, the same month Leslies moved a couple hundred feet away in their Evans Oaks house. Not only do the two families love living together, there are myriad other benefits as well. They share work on the house and around the house, provide support for each other as parents, and of course share housing costs. Sharing the mortgage, maintenance, and utilities means no one family is stretched to the limits financially. In fact, it would have been hard for Emily and Elijah, a nurse and teacher, respectively, to buy a home by themselves in their own hometown, where housing costs have risen dramatically.

How it Works – Daily Life

Since they co-own the house, they have shared bank accounts for house expenses. They also have a shared bank account for food and other household expenses. They have both a food budget and a house budget. The two women are planners. On Sunday they set aside time for meal planning for the coming week, budgeting, and reviewing the upcoming calendar.

Kate and Elijah are the cooks – though others will help out. The one solid rule is that if you cooked you don’t have to clean up. They eat together all nights but Wednesday and Thursday.  These are date nights. One couple will go out while the other is home with the children. The next night the other couple goes out. Friday night is celebration night. On weekends they might have breakfast together.

They have a Costco membership. Costco is in a nearby city where both Kate and Emily work. Costco only allows two people to be on a membership, so Kate and Emily have the memberships and often do the big shopping together. Anyone might shop at the local grocery for items that are needed.

It worked out that the house tasks that need to be done fall into five buckets. They therefore have a five-week rotation with each person having one task for a week. The idea is no one is stuck doing the same job all the time. Each person works to do a good job so that the person who does the task the following week isn’t unduly burdened.

When the Leslies moved out, their rooms were converted – one to a playroom for the children and one for a guest room that also serves as an office. John says, “We’ve never had an issue with guests staying. We’ve had family come in from out of town. We’ve also had an in-town family member stay with us for several days. One of the benefits of coliving is that our housemates’ family — Emily’s sister, for example — becomes an extension of our family, too. We get to love and support her, which we do.

How It Works – Spiritual

When asked about what makes it work, they use the idea of “mutual submission.” This speaks to the heart. “We love each other… We want what is best for the other. So the question is, ‘How can I serve you?’ John says “We are vulnerable with each other.”  John uses the metaphor of a rock tumbler. “There’s a kind of churning energy that makes it work. We are all in it together and over time rubbing up against each other each of us becomes a better person, we shine just as a polished stone will shine.”

John quotes Joel Salatin, who said “Regulations are a poor substitute for relationships.” John  says, “We have the relationships, we don’t need the regulations.” He also admits that house meetings “are so important” but that he didn’t like them for a long time. Their Sunday meetings are for planning and checking in, making sure everyone is on the same page. Other meetings are helpful for checking in and managing interpersonal issues before they become an explosion. He says, “It’s like an internal combustion engine. Lots of little explosions move the car forward as opposed to one big explosion….It’s inevitable that there will be conflict. I’ve learned the hard way that it’s important to address issues early. I grew up conflict-avoidant, with a passive-aggressive streak. It’s easy to let things fester, but it’s not a good idea. We’ve learned that if we think something we have to speak up about it.” For instance, he says, “I have a melancholia, where I want to go away and really ‘soak’ in my feelings. My housemates have had to learn that it’s not about them.”

“The last two years reinforced for us why this has been so special.” They had a wildfire and had to evacuate. They evacuated together. Another time, there was an ice storm that took out power for six days. “Together we were able to share the load.” It’s a resilient way of living and show this can be one way to build strong and resilient places.”

As John says, “It’s been wonderful for us!”

We asked about the good times when John and his home-mates say to themselves, “I love that we live this way!” They discussed this and what to say. John writes, “What’s interesting to me is that most of the things they came up might seem “small,” but they hint at just the simple joys of sharing life in this way: Buying a house together, of course, and the day baby Milo came home from the hospital, but also gardening together, doing remodeling projects together, playing with each other’s kids, and the annual tradition of picking out a Christmas tree at a local Christmas tree farm. There is another tradition they started at the beginning of the pandemic, during stay-at-home orders, and which continues to this day: Friday Night “’We Still Like Each Other‘ Celebration Dinners.”

We also asked about hard times. “We talked about the little things that can start to annoy us over time and how it’s best to talk about them right away. There are times when we’re not in the same place at the same time. This happened during COVID when one of us—okay, me—was ready to open up faster than the others in the house. This was one of those times when mutual submission is so important. Out of love for my family and housemates I put aside my personal preferences. What’s that saying? ‘If you want to go fast, go alone. If you want to go far, go together.’ This is a slower way to live, but it’s also richer, more interesting, and more sustainable.”

John and his household have in place two of our four principles for living well with others: Live by the Golden Rule and “do it while it is easy.” Living with others is not rocket science, it’s as natural to us as breathing. What’s so hard is living isolated. I think also the fact that they’ve made a commitment to “go in the same direction together” will allow them to weather the inevitable changes that life brings.

Can you see yourself co-living? What attracts you? What worries you? Comment below.