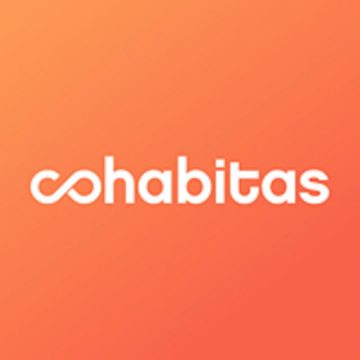 Sharing Housing, Inc. first learned of Cohabitas when the co-founder, Nick Henley, contacted Annamarie to learn more about us and how we could possibly collaborate. Although Cohabitas is located across the pond in the United Kingdom, we thought that as part of our series of shared housing services that it was an important company to feature for our readers who live abroad and who are searching for a potential shared home.

A Better Way of Living

The idea of Cohabitas came about when Nick and his co-founder Eva Orasch shared their common experience of how difficult it was to find a place to live as older adults. In Nick’s own case, newly separated, he had searched high and low for a room to share for almost 18 months. “I wanted to share partly for financial reasons as well as social reasons, as I found living alone a bit boring and hugely expensive,” he said. Unfortunately, he discovered that many people who had rooms to rent in their homes were iffy about renting to a 50-year-old man.

While Eva had a successful shared living situation, she had a widowed parent with little social interaction. Nick and Eva had converstions about how things didn’t seem right for their widowed parents, “…to be sitting there alone each day, each in their own homes, with but little social contact, seemed wrong; there must be a better way. Why should only younger people share?” Nick said, “So one conversation led to another, and we decided to start a kind of matching service. We both had marketing experience, and I had also run a small web development business, so we knew how to get things up and running relatively easily. It was very much a test to start with.”

Early on, both Nick and Eva felt that finding the “right” people was the most important factor when someone is considering living with another person. From their own experiences, they developed what they considered as the major reasons for people’s sharing preferences.

Nick says, “The first step is introducing people, an aspect in which the website plays a key role. This is where people can find others interested in house sharing and can start to find what we call ‘like-minded’ people. We do not do matching for people, but instead provide the information and tools allowing them to find and then judge whether someone sounds right for them.

“This leads to an important key point about our philosophy on house sharing: we do not believe that there is a one-size-fits-all and that different combinations of people, as well as all types of sharing can be appropriate at different stages of someone’s life. We’re a broad church.”

In getting the word out that the site exists, Nick and Eva have organized and hosted Cohabitas introduction events, dinners and group meetings for those interested in house sharing. “These were only possible in larger cities, like London and Bristol, but we found these were not so well attended, even though people sign-up in advance. That could be shyness, or just be an unattractive idea until you know who is going to be there,” he said.

One example of a successful connection from one of the meet-ups was a woman from New Zealand who has found the perfect house share partner by chance. “I know that she made some good contacts from the group meetings, but in the end, she found the perfect housemate by chance; an Italian woman of similar age. One of their connection points includes learning about Italian cooking, which was not on her list of conscious interests. It was just pure chance she met this woman.

A new feature of the newly, revamped website encourages and allows the site visitor to create ‘buddy-up’ groups based around an idea for a share. “The idea is that users can identify themselves as being interested in a buddy-up (as well as continuing to show interest in renting a room in an existing share) and are then able to suggest a group idea – for example, ‘Vegetarian house in Camden Town’ or something like that. These ‘ads’ are grouped in a new section called co-living.”

“We expect that to grow to be important as people are increasingly interested in sharing for both financial and social reasons but realize that who you share with is the most important thing. Like in so many aspects of life, lockdown due to coronavirus has been a magnifier and people are actively considering how they want to live even more now.”

The majority of Cohabitas registrants are women and fall between the ages of 45 and 64 (20 percent fall under 45 and five percent are older than 64). Cohabitas would like to bring more services such as tips on how to search and messaging to help that older group get connected as well as offering a new registration service that enables non-computer-savvy seniors to join either via the phone.

Currently, Cohabitas has over 20,000 people who registered in the last three years (90% are based in the United Kingdom), with about 16,000 continuing to have an account and to receive our newsletters.

“We do not know how many people have found housemates as we do not manage the connection between individuals beyond providing the means for the initial introduction. Once registered users can use private messaging to contact other users without revealing their personal email. We have seen a big increase in messaging between users in the last six months, so that is one indication,” Nick said

“The new site does allow us to partner with other service providers and the main focus here is on more locally focused services that assist mainly older groups find a shared home. We cannot deliver such services at a local level, even in the UK, so we envisage having many local partners who can provide this type of service. These services can register for free on the new site and appear in a new services section – again this is an example of helping to provide a broad range of house-share solutions.”

In addition, Cohabitas users are not solely from the United Kingdom; its services reach out to 15 percent of users from other English-speaking countries—primarily the United States as well as Australia and Canada. The new site will allow for expansion into other cities and countries, both in English and in other languages.

Given the realities of world economies and aging populations, Nick believes the majority of adults aged 40 and older will live in some form of a shared housing environment. “This is a social and financial necessity that makes so much sense. What that will look like I do not know, but I do know it will have many different forms of shared housing and we will do everything we can to connect people with like-minded individuals to share a variety of home settings.”