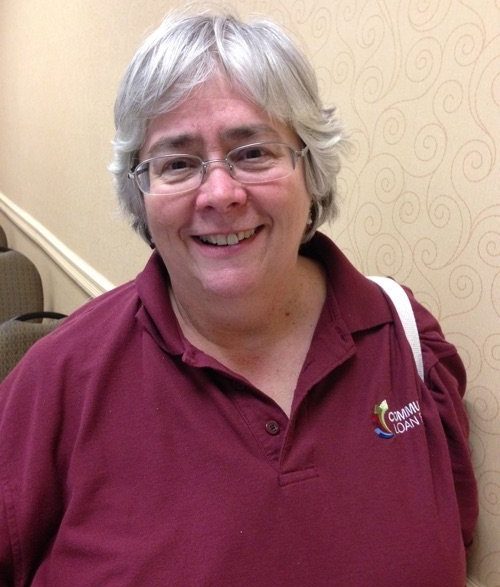 It became a cooperative. Julie and friends from college had a vision of living together. And where many of us may have enjoyed conversations where we dreamed about maybe living together, these friends actually did it. A cooperative house is a wonderful way to get all the benefits of a shared home.

In 1979, they bought fifty acres in New Hampshire. Eleven years later, they moved into the house they built there. It took that long for everyone to have the financial ability to participate and move to the area. As each person arrived, they simply moved in with the others who were already living together. Julie says, “It got pretty crowded!”

One original vision was that each person would have a small house joined to a common building. They came to realize that it would be cheaper to have one home and would be more marketable whenever they decided to sell it. After all, says Julie, “We were already living together.”

A co-operative turned out to be the right legal structure for Julie and her five friends. “We observed that when things fall apart it can be expensive and cumbersome.” She laughs, “I believe in planning for worst case — the ‘prenup’ agreement.” So they turned to the cooperative structure. In that way, each person would own a share of the corporation and if someone wanted to leave, “it wouldn’t disrupt the group.” Twenty years later, one of their members died and her share was distributed to the others.

Being a co-op means that every member has one vote. But not everyone had the same amount of money to put into the building of the house. They developed a proportional method for how each member would receive proceeds when the house and land sold.

Each person makes the same monthly payments for the household expenses, including the mortgage. Everyone had to sign personally on the mortgage and each member gets a tax deduction for their portion of the interest, just as happens in a homeowners’ association.

Julie laughs as she says, “I think we overbuilt a bit.” The building is a three-story house with a full basement. On the ground floor is open space comprising the kitchen, living room and dining room. What was first conceived as a library, with a closed door for quiet, became the TV room. A bathroom, mudroom, and pantry complete that floor.

On each of the second and third floors there are four bedrooms and bathroom. All the rooms are the same size, though the third-floor rooms have slanted ceilings. The rooms are big enough for a crafts or home office as well as bedroom.

Sunday dinner is the meal when they gather and eat together. It’s also a time they might invite guests. Responsibility for cooking this meal is on a rotation, so each person cooks once every five weeks.

The Sunday dinner cook shops for the weeks food. All food and household supplies are shared with each person contributing seventy dollars each week. The shopper gets everything on a standard list plus people can make requests. Julie says, “We buy whatever people want. We like good food.” However, sweets and alcohol are personal purchases. Pet food is part of the weekly shopping list as the pets belong to all of them. They have two dogs (a Westie and a “bassador”), two cats, two sheep and four chickens.

The occasional expenses are managed through “the book.” A person spending money for the household will record it. One person then does the figuring of who owes what. This is how they share costs such as the veterinarian bills, the newspaper subscription, lawnmower repairs, and a new coffee pot.

They each have their own car and their jobs are all in the same nearby city. Julie says ruefully, “We can never figure out car pooling. People have such different schedules.” However, if a car breaks down it’s relatively easy to help that person out.

In their years together they’ve been through a variety of methods for managing the chores of a home. They tried having a chore wheel, but that didn’t work out so well. They have settled into each person having an area of responsibility. Several years ago, with the mortgage paid off, they started paying a cleaner to do the kitchen, bathrooms, and common areas.

The refrigerator is cleaned out weekly by the shopper. Anything that needs to be thrown away, or composted, gets tossed before the new shopping is put away.

Julie says, “It’s a sustainable way to live.” They have one lawnmower, toaster oven, refrigerator, freezer, and a big garden. One person is in charge of the vegetable garden but several have flower gardens they tend individually. There are substantial financial savings. “There are things we wouldn’t have if we lived individually, like the considerable land, which we can have together.”

Julie says, “We are unusual that we’ve lasted this long. You have to act like an adult. A snit fills the house with negative energy.” When two people have a disagreement, it is expected that they’ll work it out between them.

She continues, “You have to be considerate of others and it requires some compromises. I like the people, I like the conversations, I like the fact I can ask for help. We can talk about everything.

We try to balance individual needs with the group needs, but I don’t feel like I’ve sacrificed anything. It’s a lively life! It’s worth it!”