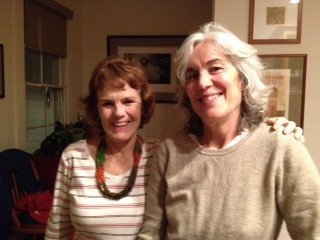 Downsizing is one way to age in place. But it doesn’t always mean leaving a multi-bedroom house to move into a one-room studio. Judy and her husband bought a house with Joyce and her husband as a way for both couples to downsize. Each couple had raised families in large country homes with big gardens and lots of upkeep. By buying together there were able to plan for their future as seniors sharing housing.

When asked how it happened, Judy says, “Joyce and I worked together for fifteen years. We’re both therapists and belonged to the same group practice. The group met weekly. We got to know each other very well and shared some other activities, working on the AIDS project and were in the same Buddhist sangha group. I had a great sense of who she is as a person, hard-working and reliable. We were friends. We are both avid gardeners.

“I knew they had already made the decision to downsize and were looking. They have a place on the ocean where they planned to spend summers. We planned to be away part of the winter and were worried about leaving our house in that snowy, cold time without someone taking care of it.”

“Joyce and I were looking for houses at the same time. We were talking about how it was going when we got the idea to look for one house together. That way they could watch the house when we were gone, and we could watch it when they were gone.”

The two couples had dinner together. While one of the wives knew the other husband through professional connections, the two men hadn’t met. During dinner, they talked about what they wanted in a home. In downsizing, both couples were clear they wanted two bedrooms and two bathrooms. Judy’s husband wanted a porch. The women each wanted some garden space. They agreed to look for a house together.

After looking at a few, Judy focused on a neighborhood she wanted to live in and mailed letters to a few people she knew in the neighborhood about what they were looking for. That led to the house that they did buy and currently live in, but it took some work to make it fit. Judy says the “biggest challenge was how to divide it!”

What they ended up doing was dividing the house into two units, front and back. For the initial restructuring of the space they hired a builder. The front unit needed a kitchen. The back unit needed another bedroom and bathroom. Each unit needed its own furnace, electricity and water. They made separate basements but have a common staircase to the basement and a common bulkhead. There is a two-car garage they both use and each deed contains a right of way for the other unit. “We split the cost of all the renovations for everyone. The idea going into it is that it would be a cooperative.”

They have a “sinking fund” for all outside expenses. They put money into it every year. This pays for house painting, snow removal, tree work and anything else that the building and grounds require.

Joyce and Judy have a weekly date to meditate and walk together. They do this in part so that they stay connected.  While each couple has their independent lives they do some things together. They have potlucks. The men play golf. Sometimes they go to a movie. Occasionally they give a neighborhood party together. Says Judy, “It’s working out really well. It’s been seven years.”

This is another way to share housing and to downsize. While different than being in the same unit and having a common kitchen, buying a property is a big deal. For some that feels risky. In this case the fifteen-year connection between the two women with overlapping activities provided the foundation. The two men had an initial dinner to size each other up as they talked about their needs and wants for a downsized home.

Have you considered buying property with a friend as a way to downsize? Have you done it? Would you do it? Why or why not? Do you have regular planned times with friends so that you stay connected?

Read more about real peoples shared housing situations: How Ann Marie Shares Housing with Family , Meanwhile They Own a Condo