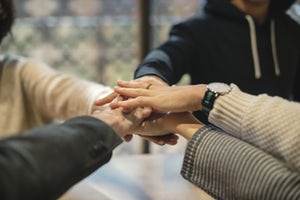 Larry and Jane,* out of the goodness of their hearts, have developed what one might call a non-intentional community. Aware of the difficulty of finding affordable housing, they’ve opened their home to a variety of people. As Jane says, “We don’t have a lot of money, but we do have housing. It’s one of the ways we can contribute.” Being able to save money in a shared space is one of the major benefits of shared housing.

They live in what was originally a three-bedroom, one-and-a-half bathroom house that Jane moved into with her family when she was twelve. It’s a small house in a town on the outskirts of a city with a large university.  After Jane’s father died, her mother, Karen, continued to live in the house with Jane’s brother, Sam. Her father’s death and her mother’s stated preference not to be alone prompted Jane to move back into their house, after many years of living across the country. Larry came with her.  Two years later they got married and bought a house one block away and lived there for ten years.

Larry then had a job where he was often gone for most of each week. Jane’s brother left the area and the house for a job in another part of the state. At this point, Jane’s mother was living alone; Jane was essentially living alone. They were both maintaining three-bedroom houses and Jane was doing a lot of going back and forth. Says Jane. “I was checking on Mom, doing things for Mom, and then coming home and doing them for myself. It was nuts.” It was during the tenth winter that Jane, Larry and Karen agreed to live together in the one house.

In order to be comfortable in the house, the attic was converted into a bedroom for Jane and Larry. They also took over the master bedroom as an office space. Karen moved into two smaller rooms on the second floor. One as a bedroom, the other for a dressing and sitting room. That was in 2003.

Fast forward to now (2018). Karen, aged 94, has dementia and needs constant care with activities of daily living. These Jane, who is in her 60’s,  performs with occasional help from others who now live in the house.  The house was paid off long ago so the cost of housing for Larry, Jane and Karen are the utilities and property taxes.

They currently have two couples living with them. Neither couple pays rent or contributes to utilities. They are very clearly guests who have been invited into the home. It developed like this.

How They Were Invited

Steve, in his thirties, works for a nearby nonprofit that Larry and Jane created. As part of Steve’s compensation taking on the job of executive director they are giving him housing, which greatly reduces the amount of money Steve needs.  At some point, his girlfriend, in her twenties, also needed a place to live, and she moved in.

The second couple, Gail and Beth, were an older couple they knew in the community. When Larry and Jane found out that they were about to be homeless, they offered them the dining room. This is not the most private room, but efforts have been made to separate the space. Gail, who is in her 70’s, has some significant health issues that make the first-floor room better for her than any other. Her partner, Beth is in her sixties. Though they have been victims of the current economic climate, they’ve developed an unusual business that is beginning to provide income. Larry is considering investing in it. They also do help with taking care of Karen when Jane needs or wants to be away.

It is a packed house. For now, it works.

How It Works – Kitchen

Jane says, “These people are our guests. They are considerate and mature.” While the kitchen can get crowded, everyone makes space for the others.

They have different routines. Jane and Larry are often up early and out of the house. “There isn’t a pattern for meals. Sometimes Mom will go to an adult day care. Then I will pack her a lunch, since she’s a vegetarian. When she comes home in the mid-afternoon, I will have a snack with her.  Steve and his girlfriend are late morning risers, may not even eat anything in the morning. They don’t eat at home very often. We aren’t often vying for the space at the same time. In the event that Steve is cooking I will find something else to do. I grab something and go somewhere else. Unless he has something specific that he wants me to do, I give him space.  It works better. He’s a trained chef, so I don’t want to get in the way.”

There’s no regular eating time in the evening.  “We just work around each other for meals. Gail and Beth can hear what’s happening. Beth cooks for the two of them and they eat in their room.” If we are in the kitchen eating and someone comes in, we may offer food and share it.”

The refrigerator isn’t divided up into shelves, but everyone seems to know what their food is. If an item isn’t clearly labeled with a name, it’s understood that it is available to anyone who wants it.

At one point Steve brought home an Insta-Pot that filled up a counter and left not much space to work in the kitchen. That was annoying. Says Jane, “I just waited it out. Eventually, he took it back to the nonprofit where it had been before. Sometimes, being patient will do it.”

Using showers works because of the different daily routines. No one takes really long showers. “People are fast in and out.” Gail, who has a hard time with the stairs, will check with those in the house before she goes upstairs to take a shower.

Asked about how the house is cleaned, Jane says “Dust is overrated. We’re pretty lax about it, to tell you the truth. Most of the time most of us are pretty good about cleaning up our own dishes. Occasionally I do someone else’s dishes. Larry will clear the deck if a few things have been left around. Beth and Gail will also do what’s there. We’ve all been house-broken.”

The refrigerator gets cleaned out when whoever looking at it decides that it’s time. It could be any resident who decides to clean it out. The downstairs bathroom is the responsibility of Gail and Beth. Says Jane, “It’s now clean much more often than before they moved in.”

“Occasionally the youngsters are loud with music and video games.” This doesn’t happen that often though because they use headphones.

They have room for overnight guests. There’s a couch in Larry and Jane’s office. There is a couch in Karen’s sitting room. That’s where her son sleeps when he visits. There is also a living room couch. If Larry and Jane are planning anything that has some formality they will mention it to the others.

About Living with Others

Says Jane, “I’ve always had roommates who are friends, they enrich my life. It’s a wonderful thing to have a shoulder to cry on and someone to rejoice with when things are going well.  Some people love to have a space that’s all theirs. That has never appealed to me, I’ve never lived completely alone.”

Says Jane, “I believe that our giving creates positive karma. We have space, so we are able to help friends who can’t make a monetary contribution.  I’m thrilled to be able to do it.“

*All names have been changed by request.

If there were more people like Jane and Larry there would be less people living on the streets. I suspect that there are more stories like this in our current economic conditions. Housing costs have become so out of line with income that it just makes sense to join forces and help one another.

Notice that Jane was already living with her mother when her mom started needing care. There were no big adjustments about moving mom or finding caretakers. Also Jane and Larry have others living in the house so that they can get away for periods of time and mom is taken care of by people she already lives with. It is clear in talking with Jane that the caretaking is taking a toll on Jane. How much harder it would be if they weren’t already living together!

For many people who have homes with unused bedrooms and who have never had housemates it is hard to envision that it could be a good thing to share housing.  If you’ve read this far, you probably already believe in shared housing.

How do we help more people see the benefits? Would love to hear your thoughts and ideas.

Read more about real people sharing housing: The Dog Caused Beth’s Home Share , How Would You Ask for a Change? Here’s another article that looks at living in multigenerational housing.