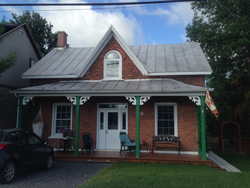 Ken and his wife, Kathy, had had two long-term wonderful and fulfilling experiences of sharing housing with others. So when they invited a single mother and her two daughters to live with them it was natural to expect that they would have a similar experience. It turns out to be a bit more challenging. The third housemate situation didn’t match with their needs like the first two.

Like many of his generation Ken lived in group houses before he met Kathy and then with her in a variety of arrangements. In the seventies he lived with his good friend, David, and both their girlfriends.  The two couples lived together on and off for seven years, as they married and began families. When David decided to pursue a doctorate, this period came to an end as  he and his wife moved to the city.

Ken and his wife bought a large house when their first-born was six and their second was one. They still live in that house, a large house in the country  in a small town.

When these girls were little, Ken and Kathy invited a single mother, Alice, and her two young daughters, 5 and 7,  to live with them.  Ken remembers this as an idyllic time, “Sitting around after supper with four little girls all under the age of ten and the two mothers, reading aloud from books like Charlotte’s Web, The Faraway Tree, and The Lion, the Witch and the Wardrobe.  It was magical.”

Says Ken, “We lived as a family” and continues, “There’s no single definition of family. It’s people who choose to be together, to support each other.” Alice and her girls lived there for seven years—which for children constitutes a huge chunk of childhood.    They moved out when Alice married. They now live just up the road and both families continue to be in each other lives.

Three years ago, Ken and Kathy invited Christine and her daughters—one who was then twelve-years-old, the other twenty-two—to live with them. They wanted to help her. They were friends and knew that Christine had no one else in her life and was having a tough go of it. With three empty bedrooms in the front of the house they had plenty of room for the family. It seemed like a good idea at the time, but it’s been challenging.

The youngest daughter is now fifteen and is not having success at school and is hiding her grades. Her mother works  from 3:30 PM to 11:00 PM so she isn’t home when her daughters are. Ken says, “Christine isn’t a role-model for her children…it is difficult to watch the neglect.”  He continues, “There is a real difference in how they live their lives. The mom keeps her head down and lives day to day. Her daughters do the same. There’s no future planning or expectations.”  The older daughter did move out for awhile, had a part-time job, but couldn’t make it work in this economy so she came back “home.”

One result of the schedule is that Ken and Kathy do most of the cooking for the girls.  Occasionally when the mom is home they all eat together but often they just grab what they want and eat in their rooms. Ken says, “They seem afraid of the kitchen.” Ken says, “Everyone is in their own room with their own screen.”

Currently an attempt is being made to change the situation. Christine has been given an ultimatum that she must be home in the evenings for her daughters or they need to move out at the end of the year. This will require that she either change her shift or find a new job. Ken is hoping that this pressure with support will create the change necessary.

Maybe the ultimatum will make a difference.  When the ultimatum was delivered as part of a larger talk Christine understood and earnestly agreed that something needed to change. Ken is dubious that she will act on her good intentions.

This is a classic housemate problem. It is all too easy to assume that past success ensures future success. The first two times of sharing housing, Ken and Kathy lived with people who had similar interests, values and ways of living in the world. Things flowed because of basic understandings and assumptions that were shared.

Christine doesn’t share these understandings and assumptions. And therein lies a part of why the situation is challenging.  But only a part. I certainly think it is possible for people of very different lifestyles and values to live together. What is essential is a contracting conversation about how the arrangement will work before an actual move.

Clarity and agreement on how everyone is going to live in the household are essential. It has to happen before the move or it’s not a real negotiation. When the conversations come afterwards the person (people) who own the home or the lease always hold the power and have the final say in how things should be. Before the move allows for both parties to say, “Oh, that’s not what I want, I don’t think this is right for me” with no major repercussions. In wanting to help Christine,  I’m sure it was easy to overlook the basic and essential negotiation of how they would live together. No doubt it all started with high hopes, but hope alone does not make a household work.

Making things explicit and clear is not the easiest conversation to get started. The Interviewing Guide is designed as a way to begin the conversation and prompt a deeper conversation. In addition, when children are involved, it’s important to talk about child-rearing philosophy and practice. A place to start that conversation is the worksheet on discipline that goes with the section about children in my book.

Do you have a story to tell about when a situation did or did not work for you? What happened? Tell us below.

Read more about navigating shared housing decisions: Why Letting Go of Stuff is the First Step , How Do You Know When It’s Time To Move Out?