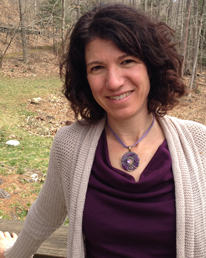 Divorced, the mother of two adult children, Cynthia left the rural community where she had lived for many years for life in the Boston area. Her journey taught her the benefits of living in shared housing, and she hasn’t looked back since!

At first she lived in a studio apartment by herself. It was a tiny apartment. She says, it was “so depressing, so isolating, so lonely.  I came from a really active life with two children, an active business, dogs and cats. Living by myself was so quiet. It became harder and harder to go out and do stuff. The loneliness feeds on itself. I started to get really hard on myself, really down.  I actually started eating frozen dinners. I’d never done that before.  It’s just hard to cook for one person. I used to love inviting guests to my house and cooking meals.  The apartment was tiny and I tried to keep it neat but within moments it would get disorganized since the same space served as my office, kitchen bedroom and bathroom and coat closet. It wasn’t a good place for having friends visit.

Recognizing that living alone wasn’t working for her, Cynthia gave up the apartment after a year and took care of a friend’s house for three months.  At the end of that period, she turned to craigslist to find a situation with housemates.

She responded to an ad that attracted her. This home owner was an older person, it was in a good location and the way it was described as a co-op sounded interesting. There was parking and the rent was affordable, quite a lot less than the studio and had the advantage of offering the use of the whole house. When she showed up for the interview the people in the house were eating polenta pizza. Immediately she felt comfortable. The room available for her was the size of her former apartment. Cynthia took it right away and has been living there very happily for a year.  She says, ““It’s so much fun!….sometimes we just sit around with tea and talk for hours.”

The homeowner is a woman in her early 60s who has owned the house for 30 years and has always had it as a cooperative house. The five bedroom house always has at least four people renting four bedrooms. There are two bathrooms. Most of the housemates are graduate students, often from overseas, with busy lives.  Cynthia said at one point they had two couples in two of the rooms – that didn’t work out so well.  It was just too many people.

Cynthia and Harriotte eat together. Because Harriotte is blind, Cynthia does all the shopping for them.  While everyone chips in for the staples, such as, milk, oil, cleaning supplies, bananas and bread, not too many of the housemates spend much time in the kitchen cooking.  Each person has a shelf on the fridge.

When asked about house rules, Cynthia has to think about whether there are rules. The only iron-clad rules are the ones that are necessary to Harriotte’s safety: Don’t leaves knives out, put things away where they belong, leave paths clear, don’t move her stuff.  Other than that communication is really important and Harriet interviews very carefully to make sure that only those who can and will communicate move in. There is a house cleaner.

Cynthia says, “We hang out in the evenings in the kitchen there’s lots of laughter, it is endlessly fascinating.  We go out together sometimes. It’s like having a family.  We check in with each other, we have a sense of belonging.”

Read more about real people making Shared Housing work for them: I Have The Desire Of My Heart , Her Chosen Location Made Possible with Housemates