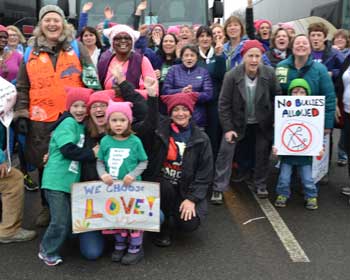 Two buses of Vermonters went to the Women’s March in Washington. I helped organize them. In November, when we started, we had no idea that the march would develop sister marches and that by the time the day was over there would be more than three million people participating in 914 marches worldwide. (A high estimate is 5.2 million.) Washington, D.C., had over half a million people alone.

I marched because I was horrified then and continue to be horrified that our electoral process has given us a president who is so unbelievably ill-equipped to be the “leader of the free world.” Our legislature is in the pockets of big money. I’m deeply worried.

Many people are suffering in a political system that rewards corporations whose only interest is in making profit. Big pharma, big oil, big banks, big insurance and big media have no interest in making life better for citizens. One example that particularly galls me are the usurious interest rates on credit cards.

Lots of energy is going to be expended trying to minimize the harm caused by the forces currently in charge. Wouldn’t it be so much better if we had a government that wanted to be kind to our citizens? This is not a delusional idea. Other countries take care of their people.

We used to take better care. When Lyndon Johnson signed into law The Older Americans Act (OAA), it created a foundation of services to support older adults so that they could live independently as they age. As Johnson said at the signing, “[the act] clearly affirms our nation’s sense of responsibility toward the well-being of all of our older citizens.” That was fifty-two years ago.

Meals on Wheels, Senior Centers, and caregiver support services are among the programs that the OAA funds. But they are not enough. If the political climate were different, if taking care of citizens were the top priority, there would be active work on legislation to deal with the housing crisis older Americans are facing.

We know there is a crisis. In 2014, the Joint Center for Housing Studies of Harvard University published a detailed report warning that “The nation is facing a lack of affordable, physically accessible and well-located homes for America’s aging population — especially those with low incomes.” The federal response to this crisis seems to be to ignore it.

In fact, funding for rental assistance dropped every year after 2011. According to the Center on Budget and Policy Priorities it  “has fallen sharply over the last six years, largely driven by rigid caps on non-defense discretionary programs that policymakers enacted as part of the Budget Control Act of 2011. Left unchanged, the budget caps could drive housing assistance spending to the lowest level since 1980, relative to the size of the economy.”

This is not kind. The lack of affordable housing is a crisis and the lack of help in finding solutions is causing much anxiety and fear. I hear it in the people who find the sharing housing site and write for help. Here are two emails I received recently.

“My mother lives alone and pretty much still takes care of herself, but she has fears of being in the house alone at night. She has 3 bedrooms and I would feel so good to know someone I could trust is there living with her so she’s comfortable. We live in central Maine and I am hitting brick walls everywhere I turn in trying to find a solution to this. Can you name some organizations I can go to in this area that can help me with this? Or simply point me in the right direction?”

“I am a single 57-year-old woman who lost her home to foreclosure. I have Social Security Disability, which is not enough for an apartment of my own at this time. I am a (for now unpaid) writer seeking work. I am interested in house sharing in New Jersey or New York.”

The options I can recommend are few.

There are some home-sharing programs that offer matching services. Each is specific to a geographical area. You can find those that exist at the National Shared Housing Resource Center.

There are Web-based matching programs specifically for seniors. Silvernest, GoldenGirls Network and SeniorHomeShares are three I know about.

My honest answer is that at this time, with this government, it’s a do-it-yourself world.

I write to these inquirers and encourage them to learn how to screen potential home-mates by reading Sharing Housing, A Guidebook for Finding and Keeping Good Housemates. If they can’t afford it, I suggest that they ask their local library to get a copy. I offer the Compatibility Assessment to help in conducting the interview process.

Why can’t we have a government that is kind to its people?

P.S. Don’t tell me we can’t afford it. We can. It’s a question of our priorities.