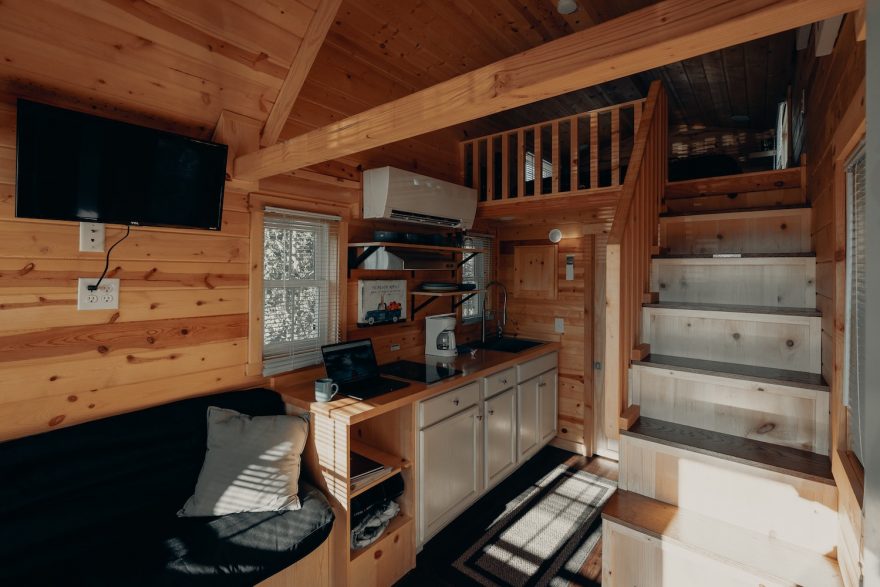 Today’s post, Living Tiny, refers to the tiny house movement. We’re often asked about downsizing to a tiny house whether it’s viable and a less expensive solution. I’d like to share some thoughts based on my experience of living with another person and three small dogs on a 27-foot sailboat and about the tiny home communities created specifically for the homeless.

Tiny Home Communities for the Homeless

According to the National Alliance to End Homelessness, almost 600,000 people in the United States were homeless in 2020. Seventy percent were individuals, the remaining 30 percent were families with children. The top four causes of homelessness as noted by The National Law Center on Homelessness & Poverty include: lack of affordable housing, unemployment, poverty, mental illness and the lack of needed services, and substance abuse. To address some of these causes, activists are building tiny homes and communities to get people off the streets and in a safer environment.

At Sharing Housing, we applaud these activists, their efforts, and the towns and cities that are allowing these communities to flourish. In a country as wealthy as the United States, no one should ever experience housing insecurity. But for individuals who are more financially secure and want to downsize is a tiny home a practical solution?

In the late 1990s I moved from a small apartment located Manhattan’s Greenwich Village to live on a 27-foot sailboat with my then-beau and three small dogs. The sailboat, aptly named, “Live and Learn,” was docked in Weehauken, NJ at a marina with facilities that included a gym, restrooms and showers, a steam room, and a dining area with a full kitchen.

At first, living in such small quarters was cozy but after 18 months I told my beau, “Find us an apartment in Manhattan before I throw you overboard.” During that year and a half of living onboard, I discovered that when you live in such a tiny space, you are constantly working to make it livable, organized, and tidy on top of the other challenges that included spending a small fortune on repairs and maintenance.

Once we decided to return to apartment living, I vowed I would never live in a space smaller than 650 square feet (the average size of a one bedroom apartment in New York City). And yet, years later the tiny house movement caught my eye.

I don’t remember exactly the first time I saw a tiny house, but it was based on a gypsy caravan. I was charmed by the decor, the romance of living in a house that was even more portable than a boat. But did I really want to live in such a space that was marginally bigger than a sailboat? Why not live in a tiny, charming bungalow that was no bigger than a 400 or 650 square foot apartment? Would this be a practical solution for someone like me who was now single with two dogs? What were the pros and cons? I sat down and listed them all.

The Practicality of Tiny Houses

After I completed the list, I researched the practicality of living in a tiny house. If I wanted to live in a tiny house on wheels, I would need a truck to pull it, find a plot of land that had amenities like sewage, water, and electricity or park it in a trailer park that allowed tiny houses. I know myself well enough this last option wouldn’t work for me. The best solution was to look at tiny house plans and see where I could build my little bungalow.

The first step was to find a plot of land that was manageable and affordable, but it had be on the grid for water, sewage, electricity, and internet. Second, what sort of bungalow style house did I want? Did I want one that had a loft or a single floor layout? The practicality of living in a house with a loft was questionable. I reached a point in my life that climbing up and down a ladder or steep steps at night to go to the bathroom could potentially lead to a broken arm, leg, hip, neck, or cracked skull. So a single floor layout seemed the wisest choice.

After living on a boat where lighting was limited (tiny portholes) I wanted a tiny house with windows and a skylight. I also wanted enough space for all my books and kitchen appliances. Building a 400 square-foot house meant downsizing more than I wanted. That meant the house had to be at least 650 square feet. But my apartment in Brooklyn measured 650 square feet and I already had downsized and I still needed more space. So I looked at tiny house plans that were at least a “spacious” 800 square feet.

You can guess where this is leading. It turned out that a tiny house wasn’t a practical solution for me. Why not purchase a small bungalow that’s at least 1,500 square feet that’s on the grid, has a garage, a front yard and back yard?

The big lesson here is that before you consider any type of housing is know thyself. I knew from living on a boat that a small space wouldn’t be optimal. To be comfortable in such a tight space, you constantly have to clean and keep everything in its place. I knew from experience that if an item wasn’t in its right spot, chaos would follow. I didn’t want to spend every waking hour sweeping, mopping, deodorizing, and coming up with new ways to optimize space.

I also discovered that if decided to own a home, I wanted it to be in a neighborhood with amenities like trash pick-up, sidewalks, and street lights. Finally, I came to the conclusion that I didn’t want to own property. I didn’t want to deal with all the paper work of getting a mortgage, paying property taxes, insurance, repairs, property maintenance whether it’s a tiny house or a regular-sized house. In the end, owing a house, even a tiny one, wasn’t a practical or viable economic solution for me.

The Next Best Thing?

At this juncture in my life, I’m happy renting and living solo. Yet when the time comes to downsize and reduce costs, the most practical solution is a shared housing environment where I’ll live with a friendly housemate in a comfortable and safe home with ample elbow room.

Have you flirted with the idea of a tiny house? Would it be a practical solution for you in terms of cost and downsizing? Let us know in the comments.


Photo by Clay Banks on Unsplash