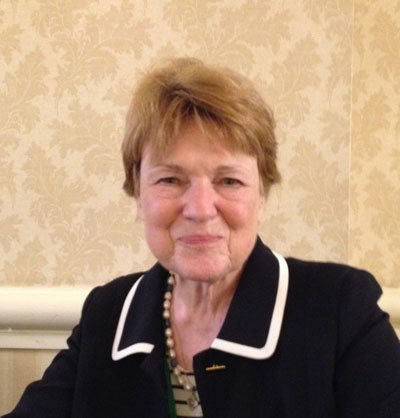 “Oh yes, living alone is awful,” Moira said to me when we met at the Positive Aging conference in August. Moira strongly believes in the power of shared housing for seniors.

Moira lives on the Left Bank in Paris. Her apartment is on the top floor of a six-floor building. When she steps out on the south terrace she has a view of Napoleon’s Tomb, when she steps out on the north terrace she sees the Eiffel tower. There are two apartments on this floor. The residents, both single women, have cats. Moira’s cat is Ms. Tinkerbell, her neighbor Marie-Claire has Mlle. Chouquette. (A type of pastry.) They take care of each other’s cats.

Moira is a South African who has been living in Paris for forty years.

How They Found Each Other

Her current home-mate, Lynn, is a Canadian in her early thirties. They’ve lived together for four years in what was originally going to be a two-year arrangement.

Lynn works for a large multi-national corporation. When her company transferred her home office to Paris she looked for a place to live. Through a network of connections she was introduced to Moira.

Before agreeing to live together they exchanged emails. Lynn sent her CV, Moira the full details about the apartment. It’s not a big apartment. The one bedroom is Lynn’s. The open area of dining room and living room gives Moira a corner in which she sleeps and an area that is her office. A big armoire contains her clothes.

At the beginning Lynn was quite shy, but that is no longer the case. Moira says, “She is very intelligent, she’s never irked or unsettled me. She’s a little untidy. I’m so lucky to have her.” It’s become a warm relationship. The families have met. “I feel like she is a niece.”

“It’s a wonderful relationship. Harmonious. We help each other out.” For instance, just before Moira left for the United States Lynn said, “Take my (plug) adapter, you’ll need it.” Moira continues, “We often end up having long conversations and talk for an hour or so. No stress at all!”

Moira is aware that for Lynn to have a place where she could speak English at the end of a work day made a big difference in adjusting to the move. Not only did she have a non-work connection but she also had someone who knew Paris and could help her get oriented.

“We keep a calendar in the kitchen to keep track of each other’s absences.  We both travel quite a bit.” Lynn is a project manager and is often gone for weeks at a time. Moira has multiple activities including The Pass It On Network.

When they are both home, sometimes “Lynn will cook and invite me to share her meal.”

Moira is an experienced home sharer. Before Lynn she had a string of housemates, some not so great and some “just lovely.”

One housemate took it upon herself to rearrange the kitchen tools. Moira says, “I didn’t set boundaries very well. I was staggered that she would even consider rearranging the kitchen.”

She remembers a Canadian who arrived the day that Moira left for five weeks. When Moira got home, the Canadian had taken over the whole apartment. And then was “cheesed off” when Moira told her she had to go.

A friend moved in for a period when she left her partner. Moira delightedly recalls how her cat Mr. Tinkerbell played the perfect host to her friend’s two cats for the year they all lived together.

Her niece came from South Africa to study at the Sorbonne.

What She Likes About Home Sharing

Moira points out, “It’s so much nicer to have someone at home. A presence. It’s also a motivating factor. Instead of letting the kitchen go wild, you clean up. There’s a positive kick on things. Lynn and I are sort of spurty people. The place can get into a mess and then there’s a big cleanup. I set my iPhone timer for 25 minutes and that gets me started. We share the cleaning of the kitchen and bathroom since we both use it, but the common rooms are mine to clean.”

Moira has welcomed Lynn’s friends who visit from Canada. They sleep wherever they can. “They’ve been wonderful! They are out all day and night. They only sleep here.”

It is also nice to have back-up. “I was traveling once and needed the code for my credit card that was mailed to me at home. It was possible for Lynn to get it to me. I have a friend who in the past would have done that for me, but she’s getting on and I wouldn’t want to ask her now.”

“When a friend of mine died, I burst into tears and Lynn held me.”

Sadly, this wonderful home-mate relationship is soon to change. Lynn is currently engaged and getting ready to move out. Moira is happy for Lynn and feels privileged to know her in this stage of her life.  Lynn will certainly be a friend forever.

So, Moira is wondering, “Who will be next?”  There will certainly be someone.

Notice that Moira doesn’t have a big apartment. And yet, she has shared her apartment for years occupying a corner of her living room. Could you live like she does? Why? Why not? The fact that both Moira and Lynn travel quite a bit means that they each have time alone in the apartment. I suspect that this is a factor in making it work. What do you think?

There is a big age discrepancy between Moira and Lynn. So what? They have a wonderful friendship that has grown. Do you have friends who are a generation older or younger? How did you make that friend?

Sharing housing is a great way to transition to a new area. By living with Moira, Lynn has a built-in guide as she adjusted to her new home. Have you moved to a new area and found yourself utterly alone because you don’t know anyone yet? Or have you shared housing as Lynn and Moira do?