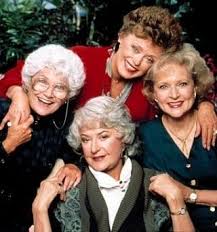 Nothing like a catchy phrase to get attention.  And the idea of women of retirement age living together is getting more attention. Seniors sharing housing is a movement on the rise.

In July of 2011 a blog post showed up on Rueters Wealth. (Now archived and off the web.) It’s the fourth unique piece since winter. I’ve commented on two. (Golden Girls in SmartMoney (no longer on line), Decades of Friendship: How the Nancys Retired). Then there was the Tampa Bay Online and  Good Morning America. All these stories have been picked up by other bloggers and news outlets. And there are groups of volunteer community activists who are meeting and talking and hoping to find a way to encourage more people to consider sharing housing as a means to “age in place.” I met a pair of dynamic activists and organizers working in Cambridge and Somerville, Massachusetts. I encountered a press release call for a meeting in the Minden Times of Ontario, Canada.

The Reuters article cites data from an AARP study that indicate there are 480,000 retirement age women living with non-related women to making up 130,000 Golden Girl homes.  There are many, many more women who, if given an informed choice, might opt for this style of living .

Using census data and arbitrarily deciding that the ages 50-69 are right for “golden girls” (though there are many plus 70s who would do fine) I calculate that there are 9.5 million single women (widowed, divorced, separated and never married) who are eligible for “golden girl” living situations. Subtracting the 450,000 women the AARP study cites who are already sharing housing and there are potentially 9 million woman who could become “Golden Girls.”

Let’s have many more articles about this way of living. Let’s include men. Let’s promote the idea of sharing housing so that it becomes a mainstream choice about how to live.

Let’s tell stories about people living in this way. We’ve been telling those stories since this original post. Check out the category, Real People Sharing Housing.  or go directly to some stories like this one about two friends who fell into living together, or Kara’s story.  Know anyone?  Invite them to tell their story here.

Many people ask me about the men. Are they not also candidates for shared housing? Sure they are, but they aren’t as interested. I think that there are a few reasons for this: