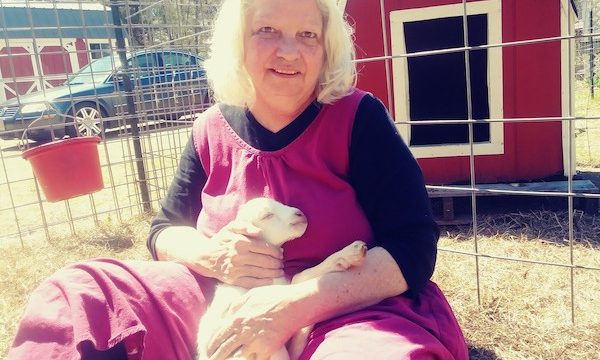 This is a story about welcoming change. As Joanne says, “Moving in with them saved my life.” This story illustrates the many benefits for seniors sharing housing.

Joanne, now in her early sixties, used to live in the Woodstock, Vermont area where she was married, raised a son, and was very active in the community, especially politics. After her husband died, she moved to subsidized housing for seniors and the disabled, which she qualified for as a disabled person. Though the housing was fine and she loved Vermont, her community, and her neighbors, after a few years she knew she needed something different. She was disabled, had a number of medical conditions, but couldn’t find practitioners who could answer her questions, so she decided to move to a more progressive area.

First, she moved to Asheville, North Carolina, expecting it to be warmer, less expensive, and offer more medical options. She lived there for a year and a half, during which she was told she needed neurosurgery to manage her condition. At that point her son persuaded her to move to Denver where he had settled. There, she could have the surgery and he could look after her. They drove cross-country and she moved into the group house where he was living.

It’s a five-bedroom house, in which there were always people coming and going. Her son is a 30-year-old artist and a musician with friends living all over the country, so the house was something of a music mecca and a place for others to crash. Housing in Denver is so tight and expensive that many, many young people live in shared housing. They varied in having four to five housemates at a time.

Joanne says, “Living there saved my life.” Her son insisted that she “eat right” which meant getting rid of the pesticides in her diet. That meant primarily organic food, fresh and local. It took about a year and the help of an Osteopath at the University of CO Spine Center, but she was also able to wean herself off of eight prescription medications with “Rick Simpson Oil” and CBD oil. It turned out she never needed the surgery. The care and support of her son and his friends made the day-to-day challenges easier. “There’s a lot of love in that house, it was a healing environment.”

Meanwhile Joanne was enjoying living with the young people for other reasons. She says, “There was so much positive energy and creativity, it rubbed off on me!” She says, “I tried not to be ‘momming’ them although they were half my age.” She discovered that they could turn to her for skills they didn’t have: such as sewing, ironing, and first aid, as well as for other advice, and she learned from them to manage tech, about new music, alternative lifestyles, and how they understand politics. “I learned about their perspectives and challenges. I couldn’t have done that if I stayed in the senior housing.”

She also points out that growing up as the second oldest in a household of eight children means that she is used to living in community, used to sharing and managing with other people around.

Beyond teaching her about healthy eating and cooking, her housemates taught her how they managed the household and living together: money, tasks, kitchen routines, etc. They’d been living together for a while, so they had developed systems that worked for them. They shared a spreadsheet with household expenses itemized monthly. They also shared living spaces, their cars, shopping trips, some basic food items, and eventually they all became close friends.

There was a lot of transition in the house over the next three years.

Whenever they brought in a new housemate there was a three-month trial. A potential housemate had to be a friend of a housemate, couldn’t be a friend of a friend. Their rules and expectations included: no over-indulgence of alcohol, “420 friendly”, a limit on pets, respecting each other’s sleep schedules regarding noise, cleaning up after yourself, and common decency. There were some housemates that didn’t get to stay, such as the couch potato who only played video games. They asked him to leave in two weeks. Then there was the guy who wasn’t motivated to work. He didn’t get to stay either.

After a year, her son moved into a warehouse in another part of town. Joanne says, “He was a drill sergeant to get me healthy, as I was getting off the meds. After he moved out, we got along a lot better…. He’d done his best. It was more than I ever expected! I also needed him to know that I had other family and responsibility for my support wasn’t all on him.” After over three years in Colorado she’d made friends, but “none were gray haired. They were all younger than me.” She had learned to crochet and create other unique fabric products by watching YouTube, but spent most of her time working in a recliner listening to books alone.

One day last fall, on a telephone call with her sister in western Massachusetts, Joanne learned that her sister’s house sitter had just fallen through. The sister and her husband have a permaculture farm and had a three-week winter trip coming up. Joanne offered to be the caretaker. So she spent three weeks doing farm work, gathering eggs, feeding the goats, and hauling water. She got stronger. She got healthier. She liked it. “And my spine doc said I need some physical therapy, so the idea of living on the farm for a while developed into a plan.”

As it turns out, on the farm was an RV that had been set up with the thought of either having a WOOFER or as an Airbnb. Her sister offered Joanne the RV to live in “until the pipes freeze!”

Joanne says, “So I came. I wanted to see spring pop, so I came in April with three hockey bags of stuff.” Later this summer, more of her stuff will come from Denver in a car of a friend coming east. Joanne is learning new skills, like soap making with goat’s milk, creating products for sale at fairs and farmers markets, and sharing the farm work with her brother-in-law and sister as appropriate.

She’s starting to look for a place to live in the coming fall and winter and will probably stay in the area near her sister — a place where there are young people as well as old. She values living in community, having a culture of sharing, and living more sustainability. Maybe she’ll look for a winter home and then return to the RV in the warm months.

Joanne says: “I really don’t want to live in senior housing alone again. I have a lot to learn as well as a lot to offer. I hope to share my experience, skills, and life with multigenerational housemates again. I highly recommend it.”

It seems to me that the moral of this story is “don’t let yourself get stuck.” Joanne might never have left Vermont where she had subsidized housing if she’d been afraid to take action. She never would have gotten to the osteopath who got her off her meds, nor would she have had the encouragement to change her eating habits. She took the risk and she took action.

Do you have a story about taking a risk and seeing what unfolded? How did you decide to take that risk? Are you currently feeling stuck and wondering how to get unstuck? Let us know below.

Here’s two other another articles about taking a risk and having it turn out okay: Get Out Of My Own Way and He Took the Plunge.