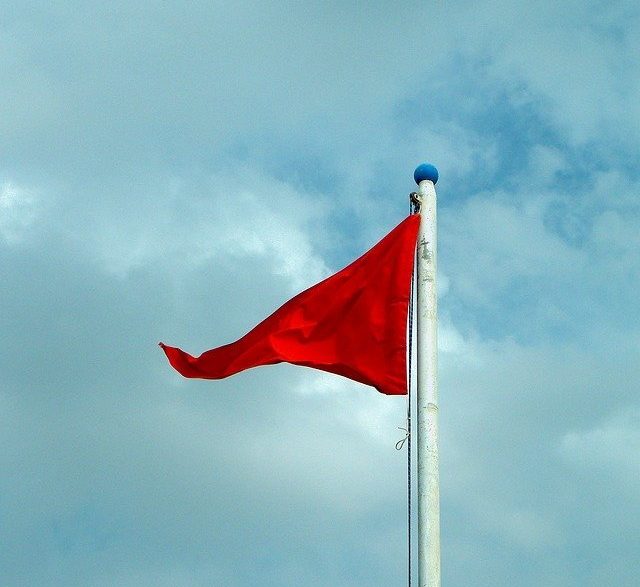 I’ll get to the red flags, but first you need to understand the situation. Catherine, in her early sixties, lives in a small town in New Hampshire.  She owns a house with four bedrooms and large piece of land. She likes living with others and finds her housemates through a combination of networking and craigslist. She’s currently living with three—Roman, Bridget and Georgia. Right now the household is in good shape, but it had a rocky period. The problems arose because Catherine didn’t know how to find a good housemate and didn’t follow a good selection process.

She’s known Roman as a member of her community for many years. He’s more or less her age.  When Roman brought his nephew’s family to New Hampshire, he gave them his apartment, which was next door, and moved in with Catherine. He’s now been a home-mate for two years.

At one time there were actually three good candidates who responded to Catherine’s craigslist ad, and there were three rooms available so Catherine and Roman decided to invite them all to dinner. Everyone understood that the intention of the dinner was find out how it might work all together. As a result, one woman removed herself from consideration and it turned out that Roman felt overwhelmed with the number of women and stated, “I need another man to live here.”

Of those three candidates Bridget was the one who moved in. A retired teacher, she was living on Long Island but looking to move to New Hampshire to be near her daughter. As part of her interviewing process she traveled to New Hampshire and stayed as an overnight guest and shared meals.

Then a couple applied who were in their thirties. This couple turned out to be a mistake.  They were there for the winter and left in the early spring.

After that, Georgia moved in. She came to the house through friends of friends. Everyone loves her and are very sorry that she’s going to move out. She’s warm, energetic and has a huge social life. She also has a great dog. However, at the age of thirty she’s decided she wants her own space.  So they’ll be looking for another housemate in the near future.

The house has common rooms on the ground floor: kitchen, living room, dining room and laundry.  This floor also has a small guest room and a full bathroom. There are three doors to the outside. Upstairs are four bedrooms. One is a general “craft room” for everyone’s use. One of the bedrooms was once configured as an apartment with the craft room. It has a small kitchenette in the corner and a private entrance. There are two bathrooms on the second floor. Though Roman tends to use one and the two women the other, everyone uses the other as needed. There is also a bedroom that is off the garage on the ground floor — however, it doesn’t have a closet. A person living there has storage space in the laundry room, which is on the way to the bedroom.

Though Catherine wishes there were more shared meals, their varying diets make it really difficult. Currently the diets are vegan, paleo, and two omnivores. Everyone buys and cooks their own food. There are two refrigerators in the kitchen and assigned storage space in the pantry. A chest freezer in the garage is also available. Catherine says, “Some people have their own stuff, bowls, cups, knives, sponge. They keep them on their shelf or sometimes in their room.”

The current arrangement for cleaning is that each has a space that is theirs to clean when it’s needed. Recently Catherine found out that Bridget was not spending time in the common rooms because of the dust. Due to her allergies she didn’t want to do a first major cleaning. Catherine says, “I’m aghast to learn this now but so glad we talked! I suck at house cleaning and just assumed we were all comfortable. We’ve decided to hire someone to come in and help do the deep cleaning, so we can go back to sharing that chore more easily.” Outside tasks such as snow shoveling and bringing in wood are done by everyone on an as-needed basis. They do have someone who plows the driveway.

They check in with each other about having guests, whether the person is an overnight visitor or for a gathering There is a guest room that anyone can use. These are put on a house calendar, so everyone knows what to expect and so there aren’t any conflicts. They also have impromptu guests, which is fine, though everyone would like a heads-up even if it’s a few minutes before hand. The expectation is to be aware of the others and how socializing affects the house. One rule is that the house is quiet by 10 PM. It’s a peaceful house doesn’t have a revolving door of friends and family.

The Challenge with the Couple

Catherine says, “They were not from the area and seemed to be drifting around the country taking odd jobs, but they were friendly and creative, and seemed ok. Their jobs were part time, and low paying, as they wanted time to write and create art. However, as things unfolded, there were issues. For one, they were home a lot and one of them was always in the common space. Usually it was him while she was holed up in the bedroom sleeping through her depression and anxiety attacks. There was a scent of drama that permeated the household. And though at the interview we talked about the house temperature being maintained with a high of 68, when the couple was home it was always at least 72, an uncomfortable temperature for the rest of the group; meanwhile, the couple went around all winter with one or two thin layers on. At the interview dinner they claimed to be non-drinkers, but it turned out he was a closet alcoholic. When housemates started finding empty beer cans occasionally, they talked to each other about it, and hoped it was just a one-time thing. When he took off one evening and got detained by the police for being drunk, the girlfriend asked for help to go get him and the car; then the whole thing blew up and they soon moved out.”

Could She Have Seen These Red Flags Ahead of Time?

Maybe. There are a couple of red flags for me as I listen to the story.

The first and most obvious red flag is that they were not one person but rather a couple. Couples bring their own dynamics to a household, as I’ve discovered in all my years of living in shared housing. When you live with a couple you have three entities, not two; the third entity is the couple as a unit. This is much more complex than adding one person. I’m sure that there are couples that share housing very well – but it’s a flag that is worth watching out for.

The second flag is their lack of roots. Why were they moving from where they were? According to Catherine, “They had been looking for country places to live to learn how to homestead, a dream of theirs. They had been doing some caretaking and barter situations, working with animals, farms, etc. Some had worked out and run their course, others had gotten weird (always the owners fault I heard) and they were ‘exploring New England’ for him.”

Here’s a third flag. Living situations that don’t work out and are “always someone else’s fault” reflect a lack of reflection and willingness to take personal responsibility for making it work. It is true that it could be the other person – but “always”?  I would have probed to learn more about what went wrong in those situations.

A fourth flag is the lack of direction and purpose in their lives. How were they earning a living? How would they pay the rent? Catherine says, “He especially had no ambition or interest in getting a higher degree or better paying job, even though he fancied himself an intellectual.” In an interview I might have pressed a bit about how he envisioned becoming a writer.

Finally, a fifth flag is wanting it to be a good match because there aren’t other good options at the time. They seemed “good enough.” Choosing someone(s) because no one else has applied is almost always a mistake.

As Catherine says, “I think this was a decent learning opportunity and they were not bad people, just not the right people for long-term.”

Some lessons from this experience:

This was not a disaster and it sounds like the couple has some maturing to do. The good news for Catherine, Bridget, and Roman is that they now have Georgia, who has been a shining light and great addition to their household.

Would you have seen these red flags? Do agree that they are flags? Do you have your own story of a bad match and the flags you missed?

Read more about navigating the difficulties of finding a good housemate: Is This You? , How Do You Know When It’s Time To Move Out?