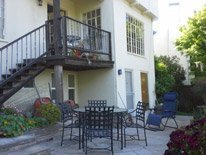 Susan and Josephine are newish home-mates, they’ve lived together for three months. Both were actively looking for the other when they met.

Susan had already rented a large house in the bay area in a friendly deal with the owner, who for a low rent keeps possessions in the house. Although it feels a bit insecure, since the owner could decide to change the arrangement when the lease is up, Susan is pleased to have a home that can accommodate her work and parties for friends and family.

She found her current house through a mutual friend. It’s a three-story split-level on a hill, with three bedrooms and three baths. The master bedroom is up five steps from the main entry way. It has its own bathroom. The top floor has two bedrooms and a bathroom. The main floor has a living room, breakfast nook, and a remodeled kitchen. The basement holds the garage, laundry room and another bathroom. This floor plan makes it ideal to share with another person.

As soon as she moved in, Susan started looking for a housemate. The person who moved in was a man who said the right things  in the interview but didn’t actually demonstrate that he was interested in cooperative living once he moved in. He needed continual reminders to do the most basic things. Then he started being late on the rent. He moved out six months later by mutual agreement. From that experience, Susan learned the importance of taking plenty of time to get to know anyone she considered living with by spending time doing things together and thoroughly checking references.

Susan met Josephine at a presentation on time-banks as an alternative form of currency. Josephine had recently moved to the area from the East Coast and was actively searching for place to live that would be in a community. She says, “I was also interested in co-housing. There just isn’t much available, since there isn’t much turnover in the local communities.” in her quest, she made a social card with her contact information that said “I’m searching for intentional community.”

Having met, they went out on a few “dates.” (Josephine’s word.) They spent time together—one a day-trip to Napa Valley—without an agenda but just to get to know one another. Susan asked Josephine to read Sharing Housing, A Guidebook for Finding and Keeping Good Housemate, to make sure they were thinking along the same lines. (Josephine loved it, a big plus in Susan’s opinion.) They are both retired and discovered common ground in education, professional experience and values. They are different in that Susan is a grandmother and helps out with the grandchildren twice a week, Josephine never married. Josephine brought a dog into the house, Susan hadn’t hadn’t lived with a dog in 30 years. Josephine is more comfortable financially than Susan.

They are pretty happy with the arrangement. Susan is the master tenant because she moved in first and has a separate sub-lease with Josephine, with the owner’s approval. Though they share groceries they don’t eat together regularly because they have very different schedules. They eat together once a week and plan the night each week after their house meeting. They are working out how to share the kitchen and meet each other’s needs: for instance, one cook prefers having her most-used ingredients on the counter while the other prefers keeping the counters cleared. Both women are committed to mutual respect and problem-solving because they get so much from living together in a beautiful house they can afford.

As far as housecleaning tasks, these are not set in stone. Josephine does more of the vacuuming in the common rooms; she bought a good vacuum to manage the dog hair her pet adds to the house. Susan does more of the deep cleaning in the kitchen.

At the time of our interview, Susan and Josephine were awaiting the arrival of Josephine’s furniture and things which would be arriving the next day. It seemed that they were both looking forward to it and were also a little nervous about it. There would be work to do and negotiations to manage as they incorporate the new furniture, kitchen implements and such like “stuff” into their home.

We’ll check back with them in six months to see how they are doing.

Check out these other articles about the journey to finding a good housemate:How Do You Know When It’s Time To Move Out? , Letting Go of Good Housemates