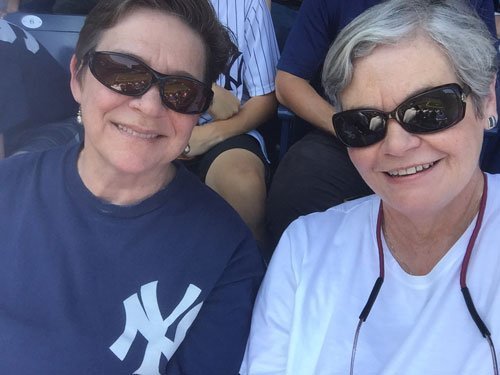 “It’s a sweet surprise to me,” says Janet about living with Kathleen as home-mates. It made sense to her to share housing for practical reason, but she was surprised by the other benefits of sharing housing, and the joy it brings her.

Kathleen and Janet were already friends. They met when Janet was Kathleen’s Episcopal priest, and Kathleen served on the vestry (a church board). Their friendship included vacationing together – Kathleen with her husband and son.  After Janet had retired and moved away, Kathleen decided to leave her husband. (The son was grown and out of the house.) She called Janet and asked if she could “land” with Janet while she figured out what was next.

Kathleen says, “Once I got there we started talking.” Janet was using the year as a sabbatical to figure out her next steps.  After she decided she wanted to work part-time, she was offered a position that involved moving. She started looking at housing options. At first she looked at apartments, but didn’t like what she saw.

As Kathleen and Janet talked about Janet’s options they figured out that if Kathleen moved with Janet, Janet could afford to buy a house with Kathleen paying rent. Kathleen: “It was an organic process. The two of us figured it out together.”

They live in a one-floor ranch house with three bedrooms and three bathrooms. They each have their own bathroom. The guest bedroom is in a finished basement, and the bathroom there is one that they added to the house. The kitchen is a “designer” kitchen because the former owner was in fact a kitchen designer. They added a four-season room onto the kitchen with a gas-burning stove and big windows that look out on the garden. It was a splurge that they debated for a bit, but are very happy with it. “It adds so much,” says Janet. They also have a dining room, a living room, acreage for gardens and a pond. Janet says, “I’ve developed aquaculture as a hobby.”

Asked whether she moved her stuff with her, Kathleen laughs and says, “I’m at an age now, I’m over stuff.” When the move was official she did hire a mover and took her silver, dishes, art work, table settings and a few pieces of furniture. She didn’t need very much since Janet already had a full home. She says she’s often asked about how she managed this part, but it wasn’t difficult.

They eat together and share all the food. Kathleen: “I’m not much of a cook and Janet is an excellent cook. So I help set the table and clean up. I have promised to help out a bit more in the cooking, but I’m not great. I’m a cookbook cook, Janet can look in the fridge and create a great meal out of what she finds.”

Janet tends to do the regular food shopping, while Kathleen will go to Sam’s. Often they’ll do it together. “Janet is better at stocking the pantry and fridge. I keep the supply chain going with the toilet paper, paper towel, and those sorts of things. I make sure that those items are where they need to be. I set up the basement with shelving, baskets and labels.”

“I tend to do the vacuuming, while Janet dusts, but really we both do it. There’s no schedule, it gets done when we see a need.” They do have two dogs and two cats so the fur does fly. Janet says, “I also see to the laundry and the ironing.”

They have a household bank account with debit cards that they both use. They split all costs. “Neither of us are bean counters by nature.”  They are respectful and aware of how money is spent and it hasn’t been an issue.

Janet gets up earlier than Kathleen and pushes the button to start the coffee. Kathleen sets up the coffee pot the night before. Janet feeds the animals in the morning, Kathleen does it in the evening.

Most of the time they go out together. They have the same friends. They keep an electronic “family” calendar so that they don’t have conflicts. Kathleen says she once put an event in the wrong calendar and Janet ended up having to miss the event because she’s scheduled a meeting.

“We backstop for each other,” says Kathleen. Janet for instance will remind her about needing an oil change on her car.

Kathleen, “We are able to help each other out, for instance with minor procedures where one person can’t drive home. Also, the other person is there to listen to instructions from the medical personnel. This is a built-in help as we age.”

Asked whether they’ve thought about the future, both women say yes. They have living wills and are each other’s health care proxies.

With the house on one floor they are confident they’ll be able to stay there. They can afford to get help with snow removal, mowing, and similar tasks.  Janet renovated her bathroom to have a walk-in shower.

It was Janet who said it was a “sweet surprise.” She continues, “The dailiness is quite powerful. There is an easiness in being yourself all the time … no need to wear make-up – some days not even getting out of one’s P.J’s. There is an ease in sharing the basic stuff, for instance, ‘I’ll pick up chicken on the way home’… It makes life easier. I can still be the introvert that I am. Living alone wasn’t difficult… together we have a house, I wouldn’t have purchased a house on my own.”

Kathleen says, “We are both completely comfortable being alone and the companionship is wonderful. We can bounce ideas with each other, talk about family issues…  I’m very positive about it. On a practical level it makes sense. It used to be that people had big families who would help out. It’s not like that anymore.”

Here are two friends who fell into sharing housing and their home-mate relationship. I was glad to give them a word for the relationship – there are people around them who assume that they are a couple – but they are very clear that isn’t the case. They are home-mates.

Like other older people sharing housing whom I’ve interviewed they had vacationed together. Spending time living together for a short period with a clear end is a one way to experiment with sharing housing. It’s not the only way – after all vacation is different from regular life.

Kathleen and Janet discovered this way of living by being open to the possibility and then saying “Yes.” It’s clear they have all the advantages—saving on housing costs, companionship, help with tasks, and support for getting older and are having a great time.  Here’s another interview of two friends who fell into sharing housing.

Do you know other people living with friends who are home-mates? Do you have a friend or two with whom you could live?

Read more about real peoples sharing housing stories: A Husband with Dementia Leads to Home Sharing , How She Left Silence and Discovered Freedom