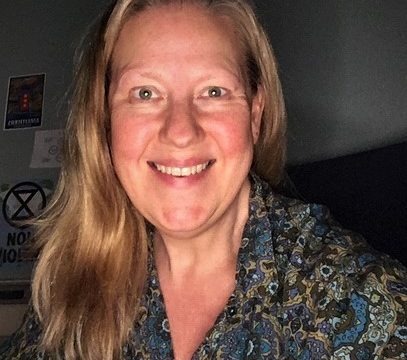 Good fortune came easily. Syd helped a friend move into the house where Syd now lives. And that friend, Gwen, was a woman whom Syd had lived with in a close-knit group more than 20 years ago. Ever since then, they both had been enthusiastic about intentional, cooperative households and maintained contacts with several of them. This handful of houses has a common culture, and see themselves as one community, linked through social bonds, values, goals and shared practices. They’ve discovered the many joys and benefits of living in shared housing.

When Gwen and her housemates decided to leave their rental in southern Seattle to buy a house together, one person stayed behind. Syd jumped at the chance to move in and four other people were recruited in a month’s time. Right from the start this household viewed themselves as an intentional community. And, the good fortune continues as the group has stayed intact, despite the fact that when they moved in together, they mostly didn’t know each other.

For Syd it is a “must have” that the group wants community and to share food and chores. With that in place, she says, “I always like home sharing with people.” She has significant experience with intentional communities.

Syd lived in the Twin Oaks during her twenties. “I leaned into it and liked it.” She found out about Twin Oaks through an ad in New Age Journal (now renamed Whole Living). She began to visit the egalitarian, income-sharing community while she was in college, did two of the three-week visitor trials. What she said to herself after the first visit: “This is different. I’m in culture shock. However, this is the direction I will go.”

For her it felt like everything she wanted. It was wholistic, activist, and a way to stay out of the capitalist system. She says, “I went for the people, the direct communication there, emphasizing learning through feedback. The fact that it was an ecologically smart way to live, with alternative energy systems, there were no bosses, and a great variety of work areas, was a fantastic system. I was never bored. Members make their own schedules, doing a variety of things that earn credits in the community labor system. I was drawn to the social change ideals we were modeling and the people. She spent about four years there, leaving when she felt that “life was going to take me elsewhere.”

In 1991, she had the good fortune to take on a volunteer role in the intentional communities world for which she moved to Seattle. She found a paying job and moved into a house with two other people. Six months in, they gave the community a name, “Orca Landing.” It became a place to gather, a place where there was agreement about certain values, such as gardening, having lots of edible landscaping, sharing meals, sharing decisions about the culture of the house.

Physical additions were made, and a year later, there were eight people living there. She lived there for four years, moving on to other shared housing situations prompted by job changes, school, or simply the desire to learn more, and to try new things. She says that she has become “keenly aware that the screening and housemate selection process is critically important when sharing a house and living under the same roof with four or five other people.”

The house she lives in has a wrap-around porch at the end of a private road, with scenic views of mountains and Lake Washington. It has three levels and four bathrooms. The top floor has two bedrooms, each with its own bathroom and shower; the main floor has the kitchen, dining room, a living room with three couches, two bedrooms and a full bathroom. One housemate pays for the two rooms on the main floor and uses one as an office. There are also two bedrooms, the laundry area, and a storage room in the lower level—which also has a door to the outside, so the two people who live in the lower level use that door most of the time. A total of five people live there with four cats. Each cat has its own litter pan. The current occupants range in age from 28 to 55 years.

The physical property is owned by a family that used to live there with five children. The family moved to New York City, but, not getting the price they wanted when they tried to sell it, have kept it as a rental.

The renters are responsible for the general yard maintenance, raking, mowing, and are able to have flowers growing around the house and grow vegetables in a new garden they put in, plus some container gardening on the deck. They pay rent to a professional property management company and work with them when house maintenance and repairs are needed. The management company requires everyone to be on the lease and to provide proof of renter’s insurance.

Syd comments, “I like that we are all on the lease, instead of one person subleasing to others, or living with an owner. When you share housing with people who are owners, they always have a certain authority about what happens – but don’t always admit it or know enough to state that upfront. Since we are all renting, the “social architecture” – or our day-to-day culture – is everybody’s say. We value communication. We like a sense of belonging and yet have a lot of individual autonomy. We celebrate diversity around a range of social issues, including relationship styles, gender identity (non-binary, fluid), dietary preferences, and would be considered by most to be extremely tolerant. We have our differences and we choose to listen and have needs and preferences respected, so that overall we get along.”

Though they’ve agreed to share meals in principle, Syd says, “It’s the weakest link.” The food in the house is shared everything except “luxury” items, such as alcohol, take-out, or treats. Housemates shop as they want to, and receipts are worked out at the end of the month. Food and household items are always well stocked. We have very little food waste; what scraps there are get composted. Eating together can be casual, as in, “I’m making this, do you want to eat together?” Currently they are trying to have one sit-down meal together a week, on Sundays. When it happens, their meal always has sweet potatoes on the menu. It happened by accident, but now has become a light-hearted tradition.

They have a house thread on the Messenger app. There is also a Sunday Dinner thread. It’s how they communicate about food items that are needed. It helps them be organized and stay in touch.

One rule they have is that there are no dirty dishes to be left in the sink. All pots and pans and plastic items are washed by hand. (There’s a dishwasher and plenty of countertop and cupboard space.) But otherwise they have an easy-going system. If something needs to be done, “people call it out.” Cleaning is  best done as a “whiz-bang” where everyone goes to work together to get it done. That happens every other month or so.

They did try to have a checklist but that didn’t work out, so they do it in a more spontaneous way. “We know some people clean more than others, but some are also around home a lot more than others. Those of us who like it clean see what needs to be done to meet our standards. For instance, seeing crumbs on the counter, and we just wipe them up without resentment. Generally, it balances out, and if we think someone is not doing their share, we will talk about it.”

Each housemate pays a different rent depending on the private rooms. The bedrooms are all different sizes. They split the utilities every month and evenly split other costs as necessary—per everyone’s consent.

On Living with Others

Syd says, “I want to live with others. It’s both practical and it fits with my philosophy and spirit. Living with others is good for us. I don’t want to live alone. I don’t need the companionship, but I enjoy the economy of scale in everything we do. It is more affordable than living alone in market-rate housing, so it frees me from taking a job I don’t like. I don’t have to take a corporate job to make the rent.

I also like being in a group, having “mirrors” (people who see me and will give me feedback about what they observe or how I affect them) and thus giving me accountability and constant source for personal growth in my life. That doesn’t mean it’s always easy or  pleasant. But I’m not that fond of easy things. Shared housing makes life more creative and more juicy.” It is Syd’s good fortune.

Read more about real people sharing housing: Invest in Shared Housing (How Jude Does It) , How She Left Silence and Discovered Freedom