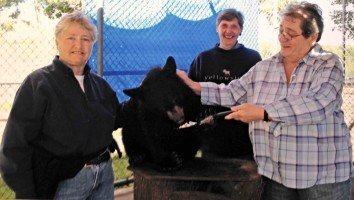 “This house needs people” is the thought that came unbidden one day as Patricia walked through the living room of her large four-bedroom colonial with three and a half baths. She had lived there with her husband but, now widowed, she simply carried on living in her home. As we age, new physical and social problems pop up. Living in shared housing has a lot of benefits for seniors.

And then she had a scare. There she was comfortably in her bathrobe and slippers watching something on the television when she mindlessly scraped a scab on her leg. Suddenly there was blood all over the place. She managed to get to the kitchen, put a tourniquet on it, and lay on the floor thinking, “If it doesn’t stop in fifteen minutes I’ll get some help.” As her surgeon later said to her, “What made you think you would be alive to call an ambulance?”—for she had had a full-blown vein blowout. This made her realize that it’s not so safe to live alone.

She started talking with two good friends, Arlene, whom she had known for more than forty years, and Jan, whom she’d only known for twenty-five years. Arlene and Jan were already home-mates. The three of them had taken many vacations together including sharing an RV! They figured if they could manage an RV together they could manage living together. The financial benefits for all of them were obvious. Patricia, as a nursing home administrator, could also see how they could be helpful to each other as they age.

She says, “People end up in nursing homes who shouldn’t be there.” “With families scattered and living alone, people don’t have anyone to care for them if they get sick. Some are in nursing homes because there is no one at home.” No one to help out in the basic ways we do in families and relationships, where there is someone to shop for food, cook meals, take them to the doctor, and otherwise be present. In fact, at her house, one of her home-mates had eye surgery and they were able to drive her to and from the doctor.

Looking for a Home

They began looking at places where they could move in together. They were agreed that whatever they found had to be better than what they currently had. But they didn’t see anything suitable and decided that it didn’t make much sense for ALL of them to move. Patricia’s house had enough space for all of them. Each has her own bedroom and bath. There is a game room, den, living room, dining room, breakfast room, and, of course, a kitchen. Everyone has space for her own leisure activity. There are also outdoor spaces in the two acres around the house, one is a deck off the den, another a patio off the game room—and there’s even an observatory in the woods.

Patricia prepared for her friends to move in by getting rid of stuff. She emptied out two bedrooms, bathrooms and the game room. She says, “They were getting rid of stuff; I could too. If I’d had to move into an independent living apartment, it would have been even more that I had to let go of. It’s amazing how much stuff can be accumulated! The worst part was going through a trunk in which I’d kept every letter, every card that had been sent to me over my life. I made myself read all of it. It took a week. It was hard and it was a gift—it made me review my life and gave me closure. I only kept a few of the letters.” Her housemates had a two-stage estate sale. In the first stage they got rid of the obvious stuff. The second one was after the house was sold. They are still sorting through the stuff they did move.

For the kitchen equipment, they kept the best out of what each owned. Arlene is a superb cook and the other two don’t really care about cooking. So Arlene decided how the kitchen would be equipped. She cooks dinner, the others wash up and otherwise help out. Dinner together happens depending on who is home. For the other meals, each home-mate shops for and manages her own breakfast and lunch. This just works better for them all since they have different diets and schedules. They discovered that “one fridge doesn’t do it,” so they bought a second refrigerator which was put in the laundry room. Arlene and Jan keep their food in that fridge.

Patricia keeps a ledger book. She worked out the monthly costs based on hard data from the previous twelve months. This is the amount each housemate pays into the account. She keeps a separate book of house costs and a large checkbook ledger. She tracks all expenses and receipts so that there is a cross-reference system and everyone knows what is happening with the money.

Patricia volunteers, “I like that there are three housemates… There’s something about that number. Two is a more intense relationship. If you have a disagreement with one, there’s a third who can be the voice of reason, who can say, ‘Hey wait a moment.’ It gives a leavening effect.” She continues, “With just one other person, nothing is diluted if you are having a bad day.” In fact, she’s not sure she would have chosen to share housing with just one person.

It was a good move for Patricia. It’s been a year and a half. She says it took some time to settle in. In their first year they smoothed out their differences and grew into the new situation. She says, “It took some time and does not happen immediately. It’s important to be patient with the process.”

Patricia says. “Honestly, you lose a few things, sure. But they [housemates] give up some things for you too. It’s fair play.” She continues, “It’s not a burden to make a change. Nothing is permanent—if it works for awhile that’s good.”

They are healthier in body, mind and soul.

Arlene cooks meals that meet their dietary restrictions. They also support each other in managing their diets. They are all eating better than they were before. Patricia says, “It’s so much easier to maintain the diet I need to when I have company.”

“It’s good to be challenged to go out and do things.” When you live alone it’s so easy to not go out, it becomes, “Oh that’s a lot of trouble.” Patricia says, “It’s a sad truth that a widow is not invited by her married friends to do stuff. They drift away. It just happens. Being alone is no fun!”

All three of them agree that a huge benefit is the company that they have for going out and doing things. By being in the same household it’s easy to share events and hobbies. Someone might see something and say, “Let’s do that!” and maybe one or both of the others will want to go. And they go in one car. Patricia says, “When we’re all going it’s not such a big deal. It’s nice to have the company at the event, too.”

“Living with others gives you more in return than you ever lose.”

How many widows are there living in houses too big for them who would be happy to have company?   This is the second time that I’ve heard of friends who have vacationed together realizing that they could live together. Though vacationing is a very different dynamic than living together, it does seem like this might be one way of testing the waters before committing to sharing housing. Maybe a weekend first? Something that isn’t a huge investment of time and money.

Patricia’s comment on the fact of three people living together rings true.  In my home sharing I always had two housemates.

What do you think? Is vacationing together a good idea? Have you thought about the difference between two and three or more housemates?