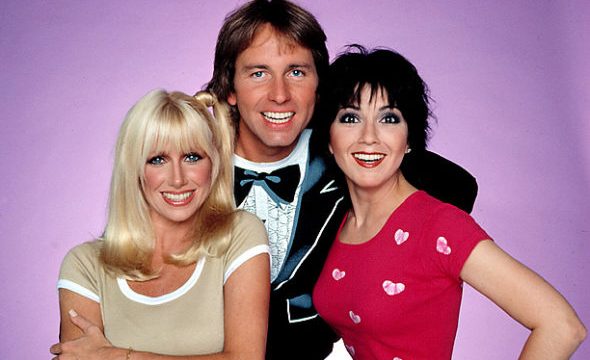 Three’s Company the situation comedy of the 1970’s depicts three housemates: one male and two females getting into scrapes and getting out of them. It was a very popular show of slapstick and innuendo.

The premise of “Three’s Company,” three people living together is a good one. Three housemates offers a good balance in a household. I might be biased because I lived in an apartment of three housemates for eight years.  I liked it because it created a flow of activity. One person might not be home at dinner time when I got home, but the other was. Two people might have a disagreement and the third mediates the disagreement.  One person might be having a difficult time but the other wasn’t. It just seemed to balance nicely. Patricia who lives with two others agrees.

However, in a household of three housemates, if two are a couple, it can be difficult.  Though there are cases when it might work, in general there is a power imbalance.  The couple acts as a unit within the home; eating together, entertaining together, sharing confidences, and making decisions about how the home can be used. The third person can feel excluded and marginalized. For everyone to live happily together, the couple to be aware of how they communicate and involve the third person appropriately in the household. This requires a level of self-awareness and maturity.

Couples Living With a Friend

Consider the case of  the housemates described in a “Dear Amy” in the Washington Post. Here the woman of a couple describes a situation of living with her boyfriend and a friend. “We moved in together last February and took on a roommate. Originally, it was to be my partner and me, but the third person needed some roommates. I knew she was a lonely character before we signed our leases, but we had a lot in common and got along great. Things have changed (surprise). She is very needy and has formed a dependency on my boyfriend that has strained my relationship with him. Before this, most of our arguments consisted of minor bickering, but we were pretty open with one another. What can I do? I’ve tried speaking to him, but it usually turns into a shouting match in which he accuses me of jealousy and insecurity. Please help. I’m beginning to feel like the third wheel in my own relationship.” Amy’s advice is good. Read it here.

Had they asked me before they invited this friend to join them, I would have coached them to consider the invitation carefully. I would have asked them to be explicit about how they would maintain their relationship. As this letter makes very clear, living with a third person can change the dynamics of the relationship. Those intimate Sunday morning breakfasts? Gone, maybe.  The dinners out? Snuggling on a coach watching the game? The question has to do with finding appropriate boundaries which the couple should establish as part of interviewing the third housemate. Always remember to do an interview as part of a housemate selection process, even if the person is your friend.

How It Can Work

Of course there are arrangements where sharing housing with a couple will work. For instance a couple might rent a room in their home. Two people I interviewed for my book lived in such arrangements. In one case,  the couple living separately in their rooms, with the kitchen the only common space. This turned out to be unsatisfactory after a year and the renter moved on. In a different case, the third person became a part of the family and a friend to the wife, especially as the husband traveled often. It also helped the dynamics that the third person had a long-distance boyfriend and left for periods of time to visit him.

So three is a good number for housemates, but living with a couple can be problematic. Think carefully before moving into such situation balancing factors such as how you will use the space and what you are expect from a housemate relationship.

What’s your experience of living with two other housemates? Does what I say here ring true?

Check out these articles about avoiding bad housemate situations: Why You Shouldn’t Have Sex with Your Roommate , Red Flags in Interviews (and How to Recognize Them)