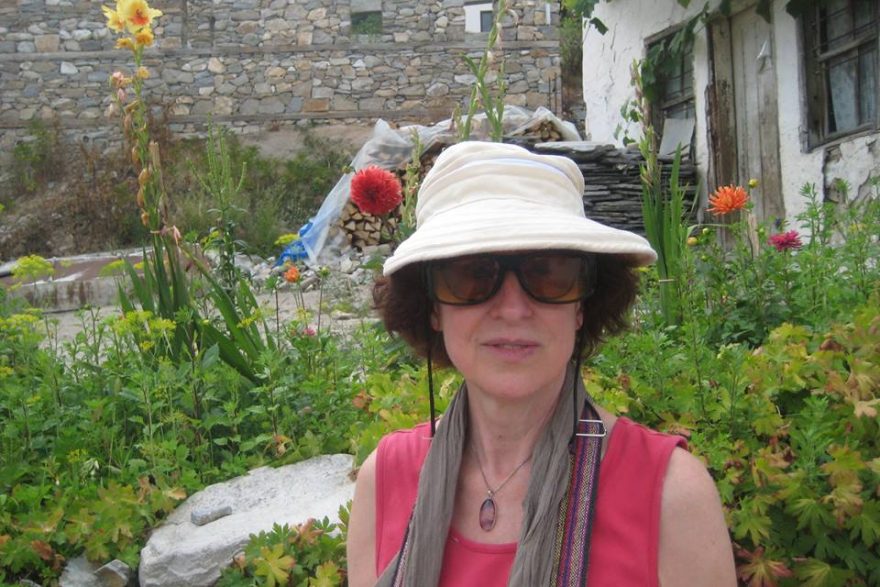 “Trust your gut,” says Judy who has been living with housemates for more than thirty-five years. “ She says, “I’ve learned to trust my gut.  Every time I go against my gut, it’s a disaster and I’ve regretted it.” Judy has learned to listen to herself in order to find a good housemate.

Judy has two dwellings. One is a small apartment in New York City that she has rented since 1976. (!!) The other is a small house she bought in the country on the Hudson River Valley in 1990. In both dwellings she has housemates. This means that when Judy is in one location, the other housemate has a place to themselves.

The apartment is 800 – 1,000 square feet or so with two bedrooms. One of them is a small room, origianlly “the maid’s room.” The apartment has a big double room comprising the dining room and living room. The kitchen is large enough but doesn’t have a table. Judy says, “It is good-sized for Manhattan.” Originally, she moved into this apartment with her husband. When they separated, she stayed, and not being able to afford the apartment on her own she started having housemates. She says, “I’ve had a housemate pretty much ever since. Mostly my housemates were okay, some have been better than others.” Judy advertises the space as “room with kitchen privileges” signaling that she’s really looking for a roomer and not someone who will be more involved in the space. About her current roomer, she says, “We’re good. He’s a private person.”

It was her accountant who recommended to Judy that she buy property. So Judy looked in the Hudson River valley area and found a small house, also around 800 square feet. It’s two rooms, one huge room containing a kitchen area, a living area with a loft that is accessed via ladder. The other room is a bedroom. The loft is a full-sized room, albeit with a sloped ceiling.

After purchasing the house, she became a landlord and rented it. But later, wanting to be able to use it herself, she decided to take on a housemate to help pay the taxes and heat bills, which had gone up considerably after she bought the house. The loft is the housemate’s living area. She says, “It has more of a feeling of privacy than you’d expect.”

When Judy gets an inquiry, she makes a preliminary phone call. In that call she can get a sense of the person and a gut feel. She’s learned to trust that initial intuition. “Some people have been good at getting past me. Beware of anyone who breaks down and cries on your shoulder telling you stories of how they’ve been mistreated. You’ll be the one who is the problem next.”

When the pandemic started, Judy left the city and went to the country house, where she stayed from March to September with only a few tripts back to the city. This is not what her housemate expected when he moved in. Normally Judy goes to the house on weekends. Judy says, “It has been hard on him but we’ve adapted. He’s been here two years already and doesn’t want to move in the midst of a pandemic. I’m trying to make it easy for him so that it works out.” For instance, there are two tables in the room and she says, “I try to confine my stuff to one.” They eat food separately and share the utility bills.

Meanwhile back in the city, her housemate lost his restaurant job because of the pandemic. He told Judy he would need to move out because he couldn’t pay the rent, but Judy asked him to stay so that someone would be in the apartment.

Judy asks for a month’s security deposit and the first month rent. If a potential housemate doesn’t have all the cash up front, “I’ll work it out,” says Judy. She doesn’t usually have a lease but when her country housemate needed to prove his residence she provided one.  They don’t really have routines or shared tasks. They do check in with each other on using the bathroom or the laundry.  Judy says, “I hope they’ll stay a year.”

Asked what she would say to people considering home sharing Judy says, “Trust your gut. Spend enough time with the person to know if you are comfortable. You know you are comfortable if things evolve into a conversation. If you notice red flags, bring them up. Know what your issues are. I’m particular about sound.  What would drive you crazy? Also, if you want the housemate to water plants while you are away, you should ask if they are willing during the interview.”

From Judy’s description of her relationship with each of her housemates it is clear that these are not home-mates. As we talked, I got the feeling that she is content with an amiable but distant relationship.

Her advice on selecting a housemate is the same as what we preach. She has figured out that an early telephone conversation is useful. She’s developed respect for that very important element of “gut” in determining if someone is a good fit. “Gut” is actually internal wisdom. Learning to listen to one’s inner wisdom is so vitally important. She’s learned to raise red flags in the interview process and to know her Must-have’s and Can’t-live-withs. Judy has learned through trial and error what we teach in our courses.

Check out these other articles about real people sharing housing: Syd’s Good Fortune Owning Together is a Win-Win