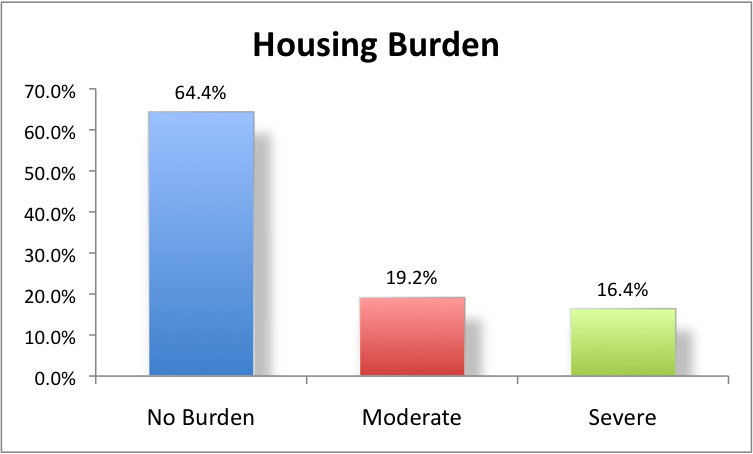 According theState of the Nation’s Housing 2010 report published by the Joint Center for Housing Studies at Harvard, 16% of all households spend more than half their income on housing. That is one in six households. And for those who rent one in four households experiences severe housing burden. That’s an awful lot of people.  To be precise, this is  44.2 million Americans, 13.7 million of them children.

Three-quarters of these households are truly poor with incomes of less than $14,868 per year. According to the study, households with children had less than $600 a month for all other expenses: food, medical, transportation, clothing, utilities, etc. The elderly and single-person households have less than $500. To have affordable housing, people in this income bracket would have to pay $372 or less for their housing.

Another 19.2 percent or 21,668 households are moderately burdened.  That makes a total of 35.6% that are struggling with the cost of housing.

How many of these people struggling to make ends meet would improve their lives significantly if they chose to share their housing with others?

Naturally, it’s not as easy as simply choosing to move in with another. It takes finding the right housemate to make it work. When conducting interveiws for for “Sharing Housing, A Guidebook for Finding and Keeping Good Housemates” most of the home sharers I talked to had positive things to say about their experience.  It’s time for sharing housing to be a realistic solution, especially for those burdened with housing costs.